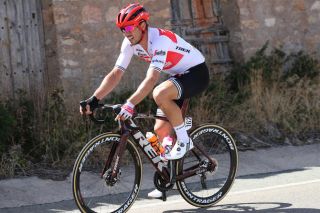 Germany's John Degenkolb (Trek-Segafredo) had anything but a high-profile race in the Vuelta a España this year, but the 30-year-old all-rounder has ground through what he called "the hardest Grand Tour of my career" with a clear objective in mind: a strong end to the year, with one highlight, he hopes, being a ride for Germany in the upcoming World Championships.

"I'm tired as it's been a very tough Vuelta," Degenkolb told Cyclingnews close to the end of the race. "My best day was probably stage 3, when I did a good lead-out for Eddie [Edward Theuns] and he got second [behind Bora-Hansgrohe's Sam Bennett – Ed.]. Otherwise, we were definitely struggling a lot in this year's Vuelta. But we've tried every day, and that's the best we can do."

Together with Philippe Gilbert (Deceuninck-QuickStep), Degenkolb is one of the few out-and-out Classics racers who has opted for the Vuelta as a build-up for the Worlds and autumn Classics. Spain used to be a route that was well-trodden by one-day specialists, but, in recent years, the Grand Tour has become a much less frequented thoroughfare en route to the battles for the rainbow jersey.

Degenkolb feels, however, that the Vuelta was the way to go for the autumn, with the Worlds as the big target race for him. Having finished ninth in Ponferrada at the 2014 Worlds and fourth in Valkenberg in 2012, hilly courses for the Worlds have suited him in the past, Degenkolb pointed out.

But despite having been a past winner in big one-day races such as Milan-San Remo, Paris-Roubaix and the Hamburg Cyclassics, and despite having taken second place at Gent-Wevelgem this spring, Degenkolb recognises that this time around, if selected, he'd be looking at a support role in Yorkshire.

"I can't say a lot about the Worlds because there's no confirmation I'm going yet," he said. "We have, like, 12 riders on the long list and only eight will go.

"But of course I'd like to go," he continied. "The course suits me, and mentally I've been suffering through the Vuelta to come out of this on a higher level and to get to the Worlds in good shape.

"That's what has been at the back of my mind all the way through this. However, I can't have big ambitions for a leader's role because I just don't have the results.

Regardless of what happens in the next two weeks, Degenkolb will then go on to the Munsterland Giro in Germany – the last race on his country's calendar each autumn, held this year on October 3 – and then head east for the Hammer Series race in Hong Kong and the Tour of Guangxi in China.

But if he has the chance to don Germany's black, red and gold Trikot this September in Yorkshire first, Degenkolb will be taking the opportunity with both hands.