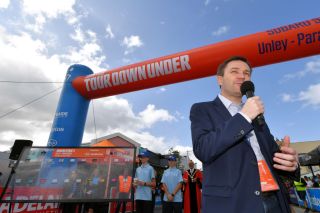 The UCI has enacted a series of cost-cutting measures, citing the effects of the coronavirus pandemic and the current suspension of racing on its finances.

Almost a third of races in all disciplines on the UCI calendar have requested cancellation or postponement due to the COVID-19 pandemic, while the governing body acknowledged that the postponement of the 2020 Tokyo Olympics will lead to a "considerable loss of earnings."

In a statement on Thursday, the UCI announced that it has placed all 130 staff members on full or partial furlough, while senior management and elected members have taken unspecified salary cuts.

It also said that it has "resized" solidarity projects for national federations, revised its financial targets for the coming years and is examining its contracts with outside service providers and consultants.

"Our International Federation is going through a crisis that we haven't experienced since the Second World War," UCI president David Lappartient said.

"Inactivity is hitting athletes, teams, organisers, partners and the large majority of people and organisations that contribute to the vitality of our sport, across all its disciplines. The UCI, cycling's governing body, has not been spared, far from it.

"The postponement of the Tokyo 2020 Olympic and Paralympic Games, the multiplication of postponements and cancellations of events on the UCI International Calendar, and the uncertainty that weighs on the second part of the season are having a large impact on our sport in general and our Federation in particular."

The postponement of the Tokyo Olympics to the summer of 2021 means that there will be both a delay and a likely reduction in the income that the UCI eventually generates from the Games. The UCI said it was in "in constant contact" with the IOC regarding the costs accruing from the postponement of the Olympics.

"We need to anticipate […] a probable reduction of the sum paid to the International Federations," the UCI said. "This amount enables the UCI to fulfil its development mission vis-à-vis its 196 National Federations throughout the Olympic cycle, via the UCI World Cycling Centre (WCC) and its Satellite Centres around the world."

The UCI said that its own commercial activities have come to a halt since its headquarters in Aigle, Switzerland were closed on March 16, and added that its "asset portfolio has suffered from the effects of the pandemic on the financial markets, combined with the collapse of oil prices."

The UCI has held a series of teleconferences in recent weeks with representatives of riders (CPA), teams (AIGCP) and race organisers (AIOCC) to discuss contingency plans that include extending the season to November and rescheduling postponed races for the Autumn.

In recent days, a number of WorldTour teams have cut rider salaries and laid off support staff due to the economic impact of the coronavirus pandemic. The UCI said that it has established a working group with the CPA and AIGCP to allow teams with financial difficulties to what it describes as "necessary measures" so they can continue to operate.

"With this temporary flexibility approved by the players of professional road cycling, our Federation wishes to support teams whose activities have been touched by the Covid-19, while maintaining the respect of the riders' rights and in accordance with the UCI Regulation," the UCI said.

Thursday's statement from the UCI did not offer any detail on the configuration of a compressed and revised racing calendar later in 2020, though the governing body highlighted its desire to run the revenue-generating events that are held under its auspices, including the UCI Road World Championships in Aigle and Martigny from September 20-27.

"Particular consideration is being given to the UCI World Championships and UCI World Cups. The rounds of the Mercedes-Benz UCI Mountain Bike World Cup are notably important in terms of revenue for our organisation," read the statement. "The postponement or cancellation of numerous UCI events as well as the general economic situation have of course also had an impact on the overall marketing activities of our Federation."

The UCI recently announced the schedule for September's Aigle-Martigny Worlds, and drew criticism from team managers including Deceuninck-QuickStep's Patrick Lefevere and Jumbo-Visma's Richard Plugge for placing the elite men's time trial on the opening Sunday rather than keeping the weekend of September 19-20 free for rescheduled men's WorldTour races.

"It is time for the cycling family to rally and, as one, prepare our sport to recover from this health and economic crisis that it has been hit by," Lappartient said on Thursday. "Each of us is called on to be united, responsible and strong. That is why the UCI has taken some drastic action that should enable it to weather the storm. These choices are difficult but necessary if we wish to rebuild cycling post-Covid-19."