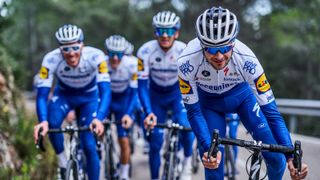 Deceuninck-QuickStep announced on Friday that it has launched an ambitious sustainability project with the hashtag "It starts with us (#itstartswithus)" to become the first carbon-neutral cycling team.

The Belgian outfit is working with a group called CO2logic to reduce its carbon footprint, its first project will be to help supply clean water to the Kaliro District in Uganda, which will help reduce deforestation by eliminating wells and the need to use energy to boil water.

A second initiative will take place around the famed cycling icon, Mont Ventoux, where the team will help conservation and reforestation projects that will help increase the territory of native wolves, the team's spirit animal.

"Recently there have been almost daily stories in the news speaking about our environment and how it is evolving. Compared to many other sports, cycling has a unique relationship with the environment in that it is our stadium and like any stadium it needs to be cared for and looked after," Communications Manager Alessandro Tegner says.

"As a team, we travel thousands of miles every year and expand a large amount of energy, so we have to take our share of the responsibility. We see this as a long-term process of educating and changing habits and it is not about just one thing.

"Like everything we do as a team, we want this to be about everybody getting involved; the riders, staff, sponsors, supporters and those around us at races and events. It will not happen overnight, but if we all do our little bit, but the benefits will be long lasting. We are also delighted that our partners supported since the first moment our initiative with ideas and comments that will become part of the project in the next future."

Deceuninck-QuickStep recognised that sport is a big factor in the current climate crisis as riders, staff and fans travel around the world and contribute to climate change through carbon emissions of various transportation methods.

The team's annual footprint was calculated at 1288 tons of CO2, "which is the equivalent of driving a car 179 times around the world, or 539 return flights between Brussels and New York" the press release stated. "The amount of forestation required to capture this amount of CO2 is the equivalent of around 3099 football pitches."

In addition to carbon offsets, the team has pledged to: reduce the use of disposable plastics and shift to recycling and using biodegradable products, encourage fans to travel by bicycle, reduce its energy consumption at team headquarters, promote recycling, discourage littering and to educate its riders and staff to respect the environment.

CO2Logic's founder Antoine Geerinckx says the collaboration with the team will set an example for all sports.

"Cycling is a beautiful and originally low-carbon sport that brings people around the world together. Unfortunately, due to the travelling requirements CO2 is emitted into the atmosphere. Together we will keep calculating and reducing the teams climate impact through daily actions and by supporting certified climate projects."