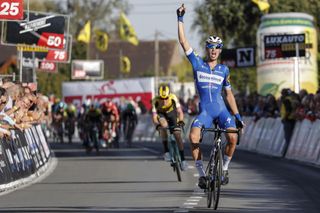 The German sprinter posted a photo of himself from a hospital on his Facebook page but declined to go into specifics of what issue required surgical intervention.

"I am currently in the cardiology of the Brussels University hospital. When I was in Calpe with the team in December and we had medical check, I was told that something is wrong.

"Well everything half as wild.. last night the plane went to Brussels. This morning at 12:00 I had the surgery. After about 2:30 h everyone was done. What it was exactly at heart can and I don't want to say."

The 23-year-old won two stages of the Tour of Austria with Team Voralberg in 2019 and won the Kampioenschap van Vlaanderen while racing as a trainee with Deceuninck-QuickStep after signing a two-year contract with the team.

He did not say when he would return to training.

Thanks for all your messages. I‘m fine and on the way back home.🙏🏼🤍🐺 . . . #hospital#brussel#take#care#comeback#stronger#thanks Jannik Steimle