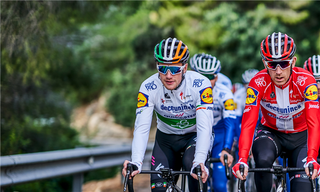 Sam Bennett will lead Deceuninck-QuickStep when he makes his debut with the team at the Tour Down Under. The People’s Classic Criterium in Adelaide on January 19 serves as the traditional curtain raiser to the WorldTour stage race, which takes place from January 21-26.

Bennett joined Deceuninck-QuickStep this winter from Bora-Hansgrohe, where he won 13 races in 2019, including the Irish national title and two stages at the Vuelta a España. He previously claimed a hat-trick of stage wins on the 2018 Giro d’Italia.

The Carrick-on-Suir man replaces Elia Viviani as Deceuninck-QuickStep’s lead sprinter and he will aim to hit the ground running in Australia, where he will be joined by Shane Archbold, who followed him from Bora-Hansgrohe to his new team.

Iljo Keisse and Michael Mørkøv will also form part of Bennett’s lead-out train, while the seven-man Deceuninck-QuickStep team at the Tour Down Under is completed by João Almeida, Mattia Cattaneo and Dries Devenyns, who placed in the top 10 overall in the past two editions of the race.

Tour Down Under 2020 race homepage

"We are looking forward to starting the new season again at the Tour Down Under, where it is always a pleasure to be present, as it’s such a well-organised race with amazing fans," Deceuninck-QuickStep directeur sportif Rik Van Slycke said in a statement released by the team.

"We go there with a strong team and a motivated Sam Bennett, who will try to get his first victory in the Deceuninck-QuickStep jersey. He’ll have experienced men around him, so we are confident he can achieve this goal. We can also think about getting a good GC result, but we’ll take it day by day, see how things go and how our riders cope with the heat."

As was confirmed last month, Bennett and his six Tour Down Under teammates will also line up in Race Torquay on January 30 and the Cadel Evans Great Ocean Road Race on February 2.