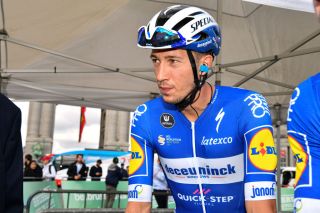 Deceuninck-QuickStep have made their eighth signing for 2020, snapping up German stagiaire Jannik Steimle on a two-year-deal.

The 23-year-old has been a stagiaire with the squad since the start of August and on Tuesday he confirmed his potential by winning the Textielprijs Vichte kermesse in Belgium. Earlier in the season Steimle racked up six wins while riding with Vorarlberg-Santic, including two stages at the Tour of Austria and the overall at the Tour of Upper Austria in June.

"It's an unbelievable feeling, a childhood dream come true!" said Steimle in a team press release. "When Patrick [Lefevere] offered me the contract, it was really crazy to think that I was going to sign with Deceuninck-QuickStep.

"I am really happy to get this opportunity and now I can really show the team and the cycling world what I can do. I am eager to see what this new road in life will bring me, but I can already tell you that I love the classics and hard one-day races, where I tend to do good and have a strong sprint from a reduced bunch."

“Just being in this jersey motivates you to give your all and go for the best possible result! Today I wanted to win, so I attacked on the first lap," Steimle explained after his kermesse victory.

"To be quite frank, all that has happened today is unbelievable."

Steimle joins Deceuninck-QuickStep after spending four years at Continental level – two apiece at Felbmayr-Simplon and Vorarlberg-Santic. Earlier successes included the mountain classifications at the Flèche du Sud, Kreiz Breizh Elites and Tour of South Bohemia last year, while he also made his World Championships debut, racing the TTT in Innsbruck with Vorarlberg.

As well as several kermesses, Steimle has also raced the Brussels Cycling Tour for QuickStep, finishing 20th. His next race is Friday's Kampioenschap van Vlaanderen, won by the team in 2017 with Fernando Gaviria.

"Jannik's signing is very special for us," Lefevere said. "We have a good track record of developing young talent and it didn't take long to decide that we would like him to stay with us.

"As well as being a strong rider, we have already seen that he is willing to work and learn from the more experienced guys around him. Crucially, he also has the personality to fit in well with the group and wants to be part of the team, so today we welcome him to the Wolfpack."