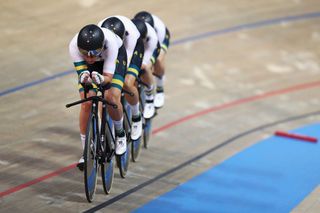 Jon Norfolk, Cycling Australia's head of performance pathways and people, is to move back to the UK and re-join British Cycling as its head of Tokyo performance planning ahead of next year's Olympic Games.

According to a report in Adelaide newspaper The Advertiser on Tuesday, visa complications have prompted Norfolk's decision to return to Britain after two years in Australia working alongside Cycling Australia performance director Simon Jones and general manager of the Australian Cycling Team Paul Brosnan in the senior leadership team.

According to the newspaper's website, Norfolk's two-year working visa will soon expire, but he's choosing to return to the UK on his own terms, rather than risking a visa renewal being rejected and having to leave the country quickly, for the sake of the medical requirements of his daughter, who suffers from a narrowing of the blood vessels in her brain following a skull-fracture sustained in Australia while playing.

Norfolk told adelaidenow.com.au that his main priority was his family, but allayed any fears that he could be divulging any of Cycling Australia's 'secrets' so close to the Olympics.

"If someone came over here and said, 'Oh, the Brits are doing this,' you wouldn't change anything and throw out your current plans based on someone else's research," said Norfolk. "And on the flip side, when I came over here from GB, we had the same sort of conversations: 'Oh, will I give [away] all their secrets?' And you know what? I've used hardly anything from GB apart from the experiences and awareness of how to solve problems.

"I've had good conversations with Simon [Jones] to know I've done the right thing. Cycling is a small place, and I want to be able to turn up to a velodrome anywhere in the world and not have enemies. But I appreciate that for some people it might be a bit uncomfortable," he said.

"The performance of the team is not down to one person," Jones told The Advertiser. "There are always challenges, we take them on the chin, deal with it and move on. We're not dwelling on it.

"It does come as a shock that it's come to this, but I've been aware of it [Norfolk's visa situation] all along, and I'm more frustrated with the [visa] process because we want to employ the very best people," he said.

Cycling Australia chief executive Steve Drake added: "He is serving a notice period with us, and I said to him, 'I wish you luck, but not too much.'

"We would have loved for Jon to stay. He's a quality guy and was doing a good job, but he had to have a plan B, and plan B, as it happens, is British Cycling. But I don't think one person will be the difference between winning and losing in Tokyo."