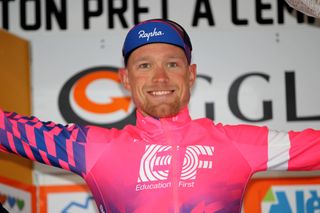 After winning a stage at last week's Étoile de Bessèges, Magnus Cort has voiced his concerns over the lack of anti-doping tests at the French stage race.

Cort, who joined EF Pro Cycling this year and finished second behind teammate Alberto Bettiol in the final-day time trial, claimed there were no tests conducted on any riders on any of the days.

Writing on Instagram, Cort was enthusiastic about his debut with EF Pro Cycling but felt the week was soured by the lack of testing.

"It is unfortunately not all good this week, there was never any doping control at this race!!!," the Danish rider wrote.

"I don’t understand how it is even allowed to have a race on this level with 7 WorldTour teams on the start line without doping control? In my opinion that is simply not okay."

Testing at UCI-registered races is the responsibility of the UCI and is carried out through the Cycling Anti-Doping Foundation. The UCI reserves the right to test any registered rider at any – in or out of competition – but its regulations do not make it compulsory to conduct tests at every race.

Still, it's common for the winner of each stage and the leader of the overall classification to be tested every day of a stage race, along with any number of selected riders. Post-stage tests usually involved urine samples but last year's Tour de France also saw pre-stage blood tests.

The UCI has not responded to a request for comment on why no anti-doping tests were carried out during the Étoile de Bessèges, which was won by Benoît Cosnefroy (AG2R La Mondiale).

"I believe that doping controls work and, if not, otherwise have a preventive effect. If there are many bike races where you know that there is no doping control, then you risk that some people speculate about it," Cort told Danish broadcaster TV2, expanding on his comments.

"I think it's very important that we have these doping controls to make sure it remains as pure a sport as it is now. It's something that has to be there in our sport, because otherwise things collapse."

First race of the season and with @efprocycling is done and dusted. What a race we had as a team. And a big thanks to all my teammates and staff for the help and a very nice week. We won 2 stages and 2 second places and a third place on a stage as well. Second in GC, winner of teams classification and the points jersey. I Finish second on the ITT yesterday behind my teammate @albertobettio , it is never a good feeling to be second but I must also be happy that I did my best ITT ever. But it is unfortunately not all good this week, there was never any Doping control at this race!!! I don’t understand how it is even allowed to have a race on this level with 7 world tour teams on the start line without doping control? I my opinion that is simply not okay @uci_cycling photo credit: Katrine Junique and photosirotti #cycling #cannondale #itishardtobeacyclist #ITT #nocontrol #notgoodenough #etoilebesseges #NoDopingControl #stepitup #rapha #poc #vision #vittoria Magnus Cort