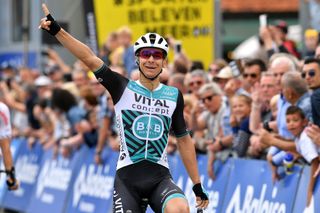 Bryan Coquard has suffered a cracked scapula after crashing during a training ride while at the B&B Hotels-Vital Concept training camp in Calpe, Spain.

The French sprinter said in a statement that the injury will not hinder his start to the 2020 season, though he will be forced to miss out on the Six Days of Berlin, which runs later this week.

"We left for a six-hour outing and, while I was leading the group, my wheel slid out in a slippery corner," Coquard said in a statement released by the team. "I wasn't in too much pain, but we decided with [team directeur sportif] Didier Rous to stop training and go for X-rays."

Coquard: I lost confidence in myself, I was scared of other sprinters

Coquard, who signed a new two-year contract with his team last August, has fractured each shoulder blade twice before, once in 2016 and once in 2018. This time, the injury is limited to a hairline crack in his right shoulder blade.

"I quickly felt that the shoulder blade was affected, but it is much less painful than the last two times. I only suffer from a fracture line, with no risk of displacement. I will hardly be handicapped in everyday life, but I will be forced to rest next week.

"It doesn't call into question my start to the season. Here in Spain, we've all worked well, alternating long outings with specific exercises. Compared to the past two years, everybody is calmer and focussed on the upcoming deadlines. We're all looking forward to the start of the season."

The 27-year-old, who is set to become a father in March, is set to return to the Tour de France this year after last taking part back in 2016 with Direct Énergie. He missed out on selection in 2017, while Vital Concept were not invited to either of the previous two editions.

This year, the race is set to be his major goal on the road, having picked up four podium spots in his three previous participations. He'll also race on the track for France at the Tokyo Olympic Games after becoming European Points Race champion at the European Championships in Apeldoorn last October.

Coquard has so far announced a handful of races to kick off his 2020 campaign. He'll race the Clásica de Almería on February 16 as well as the Classic Loire Atlantique and Cholet - Pays de la Loire on the weekend of March 28-29.