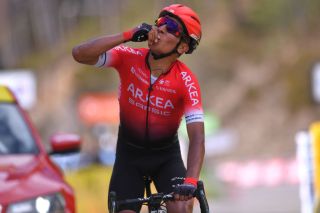 Colombian president Iván Duque has announced that over 50 professional riders in the country will be permitted to train outdoors from Monday. The bulk of Colombia’s professional cyclists had been compelled to ride on their turbo trainers in recent weeks due to the coronavirus lockdown restrictions in place in the country.

"Protocols have been designed so that they can regain their ability to train,” Duque said in a televised address on Saturday, according to EFE. “It’s a very limited group. We are talking about 50 athletes, approximately, who are preparing for the big competitions.”

Tour de France champion Egan Bernal (Ineos) was among the few riders who already had permission to train outside thanks to a special decree from the mayor of his hometown of Zipaquirá. EFE reported in late April that Bernal and fellow Zipaquirá-based professionals Brandon Rivera (Team Ineos), Camilo Castiblanco (Team Illuminate), Diego Vasquez (Colnago CM) and Diyer Rincon (Focus Team  VTT) had been given dispensation to train outside, albeit with restrictions in place.

Bernal, Rivera, Castiblanco, Vasquez and Rincon were allowed to train in the area, but only between 5:00am and 8:00am. They were required to stay at least five metres apart if training together.

Duque’s announcement extends permission to train outdoors to Colombian riders based in other parts of the country, such as Nairo Quintana (Arkea-Samsic), Rigoberto Urán (EF Education First), Miguel Ángel López (Astana) and Sergio Higuita (EEF Education First), who have been forced to stay on their turbo trainers since returning to the country from Europe in late March.

Colombia is one of a number of countries where the COVID-19 lockdown has prevented riders from training outdoors. Riders in Italy, Spain and Andorra returned to training outdoors on Monday of last week after a lengthy hiatus, while riders in France can train outdoors from this coming Monday.

The cycling season was interrupted in March by the coronavirus pandemic, though the UCI last week unveiled plans for competition to resume on August 1. The postponed Tour de France has been fixed for August 29-September 20, though the rescheduled dates are contingent on the easing of restrictions on travel and public gatherings in France.