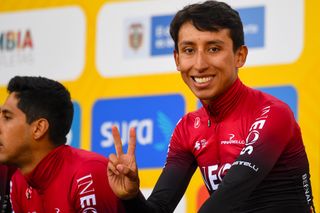 Egan Bernal and four other local professional riders have been given special permission to train outdoors around his hometown of Zipaquirá, after the local mayor extended an easing on movement and sport announced by the Colombian government.

The Colombian government announced at the weekend that people can go outdoors for an hour of daily individual exercise but the Director of Sports and the mayor of Zipaquirá issued a further special decree for Bernal and his fellow local professionals. However they are obliged to ride between 5:00am and 8:00am and maintain a minimum distance of five metres if they train together.

The likes of Nairo Quintana (Arkéa-Samsic), Sergio Higuita (Education First) and Esteban Chaves (Mitchelton-Scott) are in other parts of Colombia and will have to respect the national decree unless they also get similar special permission.

On the ground in Colombia: A fountain of talent ready to overflow

In Europe Italy confirmed that cycling outdoors is permitted from May, with France likely to allow cycling from May 11. Cycling has been permitted in the USA, Belgium, Great Britain and the Netherlands during the COVID-19 pandemic, sparking concerns about a two-speed peloton when racing eventually resumes.

Bernal has respected a strict lockdown in Colombia since March 16 after returning home from Europe when races were cancelled due to the COVID-19 pandemic. His last race was the Colombia 2.1 stage race in February. He carefully respected a period of quarantine and enjoyed a break from training before beginning a series of rides on the home trainer on April 1.

Bernal recently donated one of his Pinarello bikes and a Tour de France yellow jersey for a charity auction, raising enough to provide over a 1000 protein food packages to help poor families during the COVID-19 pandemic.

Last week he also posted social media messages in favour of using cycling as a method of transport during lockdown.

"I have a question, in times of coronavirus, is the bicycle a good method of transportation compared to others?" he asked on Twitter, adding: "If most of us and even the WHO (World Health Organisation) agree that the bicycle is one of the safest means of transport during the Coronavirus, should we look for the way in which the citizens feel safer using this means of transport? Do you think it is time to go back to 2 wheels?"

Bernal Team Ineos teammates' Chris Froome and Geraint Thomas have confirmed they will target victory at the 2020 Tour de France, even with the Grand Boucle now scheduled for August 29-September 20 and Bernal is expected to do the same, perhaps returning to his European base in Andorra to complete any needed quarantine period.

"I feel that the preparation has been much better and is all focused on the Tour de France. That will be my first and only serious goal. The other races will be geared towards that goal," Bernal said at the start of the year.