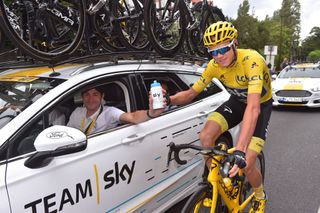 The 40-year-old Frenchman had joined the staff of Team Sky in 2011 after riding his final professional season with the new team alongside Froome in 2010, and became instrumental in Froome's four Tour victories and the British rider's Vuelta a España and Giro d'Italia wins in 2017 and 2018, respectively, as well as Geraint Thomas' Tour win in 2018, and Egan Bernal's Tour victory last year, when the team became Team Ineos.

Froome's message, posted on Twitter and Instagram on Thursday evening, called Portal "irreplaceable" and "an amazing friend", accompanied by a picture of the two of them together on Mont Ventoux in 2016.

'The kindest, happiest guy I knew', tributes flood in for Nicolas Portal

"I have been at a loss for words since I heard the news," wrote Froome. "Aside from what an amazing friend, father and husband Nico was, I don't think people understand how important and influential Nico was in our team's success over the years.

"He is completely irreplaceable, to the point where it's hard to imagine where to go from here. He was with me through the hard times, picking me up any time I doubted myself, and right by my side encouraging me to every success. He has left a truly phenomenal legacy.

"I will ride in his memory and do all I can to honour him and all that he taught me," Froome wrote, signing off "with love and thoughts" to Portal's wife and two children.