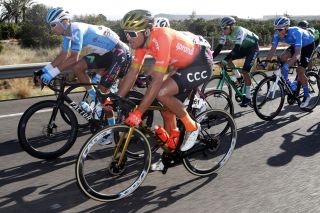 CCC Team leader Greg Van Avermaet says that he's not talking to any other teams, despite the danger of his team surviving the coronavirus pandemic. Instead, the Belgian says that he's concentrating on getting through this season and trying to ensure that the team's main sponsors can support the team in 2021.

Due to the coronavirus crisis, the Polish WorldTour team's riders are already on reduced salaries, like a number of other teams, while some members of the squad's staff have been laid off. Last week, it was reported that the riders had been asked to take a further salary reduction, with the team confirming to Cyclingnews that negotiations between the riders and team management in that regard are still ongoing.

Italian website Spazio Ciclismo, meanwhile, last week quoted CCC rider Fausto Masnada as saying: "It is not a positive situation. We riders, together with our lawyers, joined together and made a proposal to the team to meet us halfway."

Greg Van Avermaet: It's good to get some race dates in our heads

Main sponsor CCC's chain of shoe shops have been closed during the pandemic, and Polish financial website Bankier reported that part of the plans to balance the books also included "the closure of activities related to sport sponsorship, contracted for 2020-2021".

However, it's thought that CCC's footwear stores could be re-opening this week, which would provide a lifeline to both the company and, possibly, the CCC Team men's squad and CCC-Liv women's team.

"It is important that we are strong together," Van Avermaet said in a video interview with HLN.be and VTM Nieuws on Friday. "This situation is very difficult for the staff members who have lost their jobs. But they can still come back. If people race again, hopefully those people will be hired again. We have worked together with many of them for 10 years. Hopefully we can continue that.

"We talk a lot about the situation," the 34-year-old said. "We're being kept well informed and hopefully there will be a solution. The stores in Poland will open again next week, which may help our sponsor to continue to support our team.

Regarding a possible further wage cut, Van Avermaet said: "We are working on it. But we're not going to give percentages to the press. The goal is to survive this season – and then next season. That must be our mindset. We know it's not certain, but we are all fairly positive. Although it is of course not ideal."

Asked whether he'd been talking to any other teams, Van Avermaet played down any possibility of a transfer.

"It's quiet at the moment. A lot of other teams have also had to make salary cuts, so we're certainly not the only team with problems," he said. "We will first see what happens to us, and then I'd still have time to decide. In any case, my focus is on my team, on survival. That's the most important thing."

Van Avermaet was also asked his opinion on the importance of the Tour de France still going ahead this year, with race organiser ASO and the sport's governing body, the UCI, having proposed new dates for the this year's Tour of August 29-September 20. While many still think those dates could be too soon while the coronavirus crisis still continues in Europe, one option could be to run the race without any roadside fans.

"For me, it's certainly possible without fans," Van Avermaet said. "Supporters are very important in a normal situation; they give us strength and create the atmosphere.

"But this isn't an ordinary situation, so you should do everything you can to make it run safely. It's better to have no roadside fans, but for people to still be able to watch on television, than to have no race at all."