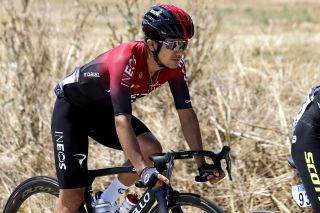 It's a case of so far, so good, for defending Giro d'Italia champion Richard Carapaz (Team Ineos). Despite his big objective of the season – defending his Giro title – still being nearly two months away, his first taste of racing action since this spring at the Vuelta a Burgos could not have gone better.

After finishing 14th on the opening stage at the Alto de Castillo climb, Carapaz came through stage 2 of Burgos unscathed, and in 30th place in the bunch sprint, leaving him poised to go on the attack at the Picón Blanco summit finish on stage 3 on Thursday, should he be ready to do so.

But given that the 27-year-old is playing a long game – or as long as is possible in this year's short, packed calendar – the Ecuadorian is logically cautious about his form, saying that "it would be rash to make predictions".

For now, in any case, things are going exactly as he wants them to go.

Carapaz to fly from Ecuador to Spain on July 15

Carapaz: I'm not sorry or sad to have left Movistar

"Starting again here has been a real pleasure, and the team has been very efficient and thorough about it all," Carapaz told Cyclingnews on Wednesday. "For me, it's been the best re-start possible to the season."

Third at the Vuelta a Burgos last year, Carapaz refuses to make too many comparisons between how he felt in the same race 12 months ago and this time around. For one thing, he points out, the field is a lot stronger in 2020. For another, given Burgos is where a lot of those top contenders are starting their season, this year's race feels like a very different ball game.

"There are a lot of big names here, and a lot of changes between last August and this for me, and everybody else as well," he pointed out. "You can't compare one year and the next."

On the plus side, he agrees, Ineos have a strong line-up for Burgos, and he's far from being the only option for the British team.

"Ivan Sosa [double Burgos winner] and I are in good form, and Eddie Dunbar is as well. But I think making predictions is a bit rash at this point."

What matters, he said, is that "I'm feeling very much on top of this and, on track for my big target of the year, the Giro d'Italia".

As Bernal's trainer Xabi Artetxe told Cyclingnews a few weeks back, however, Carapaz feels that this will be a year of "surprises", and with some very hard-fought races in such a short period to come, which could produce some unexpected results.

"Everybody is very keen to do well; people are very lively," Carapaz added. "You could see that on the first stage with all those attacks."

His next race after Burgos will be the Tour de Pologne, followed by another spell in Andorra, where he has already been training with teammate Egan Bernal. After that, he'll be spending most of his season in Italy, culminating with the Giro d'Italia.

First, though, comes two summit finishes in three days in Burgos. The 27-year-old has previous experience of both the Picón Blanco and the Lagunas de Neila, having raced up them both last year en route to third overall.

"They are both hard, and people will be very motivated," he concluded. "But I think Picón Blanco alone will decide 50 per cent of the race's final outcome."

To judge by Carapaz's comments, he is unsure, yet, of how strong he could be feeling on Thursday's first summit finish. But after last year's Giro d’Italia, where he proved to be an expert at flying under the radar until it was too late to stop him winning, his opponents know that if they underestimate Carapaz, they'll do so at their peril.