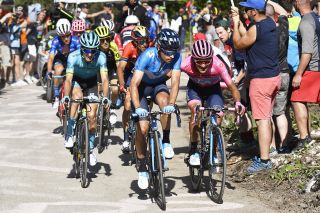 Carapaz ruled out of Vuelta a España

Landa: I'll be back at the Tour de France to fight again

Giro d'Italia champion Richard Carapaz will make his debut at the upcoming Tour of Britain, race organisers have announced. His Movistar teammate and fellow debutant Mikel Landa will join him on the start line at the race, which sets off from Glasgow on September 7.

The duo, neither of whom has raced on British soil before, will head up a strong Movistar squad for the eight-day stage race. Andrey Amador, Carlos Barbero, Eduardo Sepúlveda and Carlos Verona make up the remainder of the six-man team.

Aside from the Clásica San Sebastián, the race will be Landa's first since finishing sixth at the Tour de France. Meanwhile, Carapaz is in Britain after being forced to miss the Vuelta a España after suffering contusions and bruises at a criterium a week before the race began.

The race will be among their last for Movistar, with both men leaving at the end of the season. Carapaz has signed a three-year deal with Team Ineos and Landa will be joining Bahrain-Merida.

The 2019 Tour of Britain doesn't feature any summit finishes as it has frequently in recent years – Haytor, Hartside Fell, Whinlatter Pass – but several tough stages will provide an opportunity for Movistar's climber-heavy squad to affect the race.