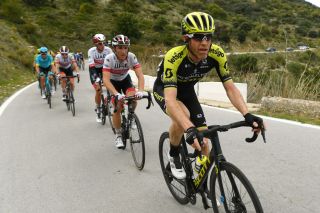 Much emphasis has been placed on providing a 'bubble' to protect professional cyclists from the coronavirus pandemic since the season resumed in August, but longer standing issues of rider safety seem to remain sorely neglected.

The latest such incident took place in the final kilometre of stage 4 of the Giro d'Italia in Villafranca Tirrena on Tuesday, where Vini Zabù-Brado-KTM riders Luca Wackermann and Etienne van Empel crashed heavily after roadside barriers were blown into their path by a low-flying RAI television helicopter.

Wackermann was taken to hospital in Messina by ambulance and his team later reported that he suffered multiple injuries in the crash, including a concussion, a suspected lumbosacral fracture, and a broken nose.

A representative of Giro organiser RCS Sport told Cyclingnews that the roadside barriers in the final kilometre had been tethered together securely and suggested that the RAI television helicopter was to blame for the crash.

Mitchelton-Scott rider Brent Bookwalter was an eyewitness to the crash, and while he confirmed that the gust of wind that threw the barriers into the path of the riders appeared to be caused by a low-flying helicopter, he believes that RCS Sport must take responsibility for the incident.

Giro d'Italia: Wackermann taken to hospital after TV helicopter accused of blowing barriers into the road

"We see that time and time again," Bookwalter told Cyclingnews. "It's easy to just pass the buck and put the blame on someone else, but at the end of the day, this is the Giro d'Italia, this is run by RCS and the helicopter is there covering their race. If they don't have any control and if the helicopter crew isn't accountable to them, then who are they accountable to? Are there just rogues flying helicopters around there, however and wherever they want?

"The race organisation is charged with creating a safe environment for us, and if they can't keep the helicopter pilots that are covering the race on a leash, then we don't need helicopters on the race. Obviously, TV coverage is important to everyone, but if the race can't happen without TV, then we don't need the race. It's ridiculous – we're sending guys to the hospital over stupid mistakes that shouldn't be made."

Bookwalter, who is racing with a back injury sustained in a crash of his own on stage 2, was part of a group of 10 or so riders who had been tailed off slightly from the peloton on the run-in to the finish, glad to tick another day off their Giro.

"I remember seeing 800 metres to go, and then really out of nowhere, the barriers were just flying up into the air and they just smashed a bunch of guys that were in my group. It was kind of miraculous that it didn't take me down, too," Bookwalter said, adding that the lack of wind on Tuesday afternoon indicated that the sudden gust had been caused by the helicopter.

"I'm not a wind or physics expert, so I can't guarantee that's what it was, but from my interpretation of it, that's sure what it was like. The wind was quite calm and steady – nothing that would suggest a force like that."

It was not the first time Bookwalter and his fellow riders have encountered barriers blown into the road on this Giro. While reconnoitring the time trial course with his Mitchelton-Scott team on Saturday morning, he had to avoid barriers that were being swept into his path by the stiff scirocco wind that had such an effect on the stage later in the afternoon.

"I think for the time trial itself they pulled the sponsor banners off to create less of a 'kite' effect on those barriers, but I know a number of the guys ran into that issue at the recon. It was pretty scary."

Frustration with the CPA

The CPA is the international representative body for professional cyclists, and the official channel through which they lobby race organisers to improve safety measures. In recent years, however, there has been growing discontent among riders about both the governance of the association and the effectiveness of the representation it provides.

That dissatisfaction has intensified in recent weeks, with a group of WorldTour riders petitioning for the CPA to adopt a 'one rider, one vote' system for elections rather than the current system of block voting by national associations. Riders have also expressed dismay at the CPA's response to the horrific crash on the dangerous finishing straight in Katowice on the opening stage of the Tour de Pologne.

"Right now, I'm fairly frustrated with the CPA because there are lots of issues we bring up and try to collaborate on, but we're met constantly with, 'We'll look into it,' but very rarely is there any action taken," said Bookwalter, who is a board member of the Association of North American Professional Road Cyclists.

"Talk is cheap. It's easy to say, 'We're going to investigate this,' or, 'We're going to get to the bottom of it,' but that doesn't bring Luca off the stretcher and out of the hospital today.

In a statement on social media on Tuesday evening, the CPA said: "Our delegate is investigating what happened today at the Giro. Clearly whoever caused this serious and unacceptable accident will have to take responsibility."

The CPA delegate on this year's Giro is former pro Cristian Salvato, while president Gianni Bugno is also present on the race, albeit in his new role as a co-commentator on RAI's live coverage of the corsa rosa. (Incidentally, the two-time world champion previously flew a television helicopter on the Giro in the years after his retirement.)

Asked if Bugno's work for the host broadcaster constituted a conflict of interest for a CPA president, Bookwalter said: "I don't know the ins and outs of his relationship with RAI and the Giro precisely, but as far as I know, it's fairly unprecedented in the sporting world and the world of athletes' associations that the president is actually in working with the host broadcaster of the race.

"He needs to be the face of our union. Maybe it's possible, but I'm not sure that he can effectively do that while also wearing the hat of race commentator."

Did anyone catch the crash that happened in our groupetto with 800 meters to go @giroditalia when the helicopter sent the unsecured barriers flying into riders just inches away from me? One of them on a stretcher to the hospital. @cpacycling @UCI_cycling @DLappartient @ANAPRC_October 6, 2020

Our delegate is investigating what happened today at the #Giro, clearly whoever caused this serious and unacceptable accident will have to take responsibility. Forza @LucaWackermann and @etiennevanempel! https://t.co/SVB9riYd9pOctober 6, 2020