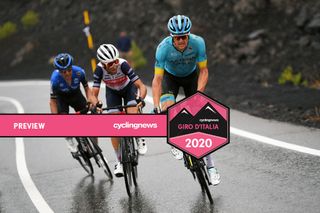 The Giro d’Italia celebrates its arrival on the country’s mainland on Wednesday with a ferociously difficult hilly stage 5 that constitutes a major test of the overall favourites' climbing strength - for the second time in three days.

Arguably harder than the short-ish 150-kilometre stage 3 to Mount Etna - which had just one, albeit very intimidating, final climb, but was relatively straightforward beforehand - the 225 kilometre-long stage 5 is the third longest of the 2020 Giro d’Italia and the first of eight over 200 kilometres long. And if that wasn’t daunting enough, as the Giro road book cheerily puts it, stage 5 “does not contain a single metre of flat.”

As stage 5 winds its way northwards from one medium-sized southern Calabrian town, Mileto, to another, Camigliatello Silano, there are unclassified climbs aplenty (as well as two registered as third category, at km 91 and km 111) prior to the biggest mountain test yet.

What next for Ineos Grenadiers after Geraint Thomas' Giro d'Italia departure?

That last challenge is the Valico Montescuro, a mammoth 24.9-kilometre first category ascent that contains over half - 1,400 metres - of the stage's total of 3,700 vertical metres of climbing.

The climb also represents unchartered waters for almost all the riders, given the finishing town of Camigliatello Silano had its only visit by the Giro d'Italia in 1982, with the win going to French rider Bernard Becaas - one of Bernard Hinault's top domestiques who was killed tragically in a motorbike accident, aged 45 - and the Valico Montescuro itself has never been tackled before by Italy's Grand Tour.

The Valico Montescuro kicks off with bang, starting on narrow roads winding through a town, which means there will almost certainly be a 'race within a race' even before the mountain itself, as teams accelerate to try and keep their riders close to the front for the start of the climb.

The bulk of the gradient of the Valico Montescuro is not too steep, averaging mostly around six to seven per cent and on broad roads with sweeping hairpins. So there will be chances for riders caught out at the bottom of the climb to manouvre their way upwards through 'traffic' and make up for lost ground  -  assuming the pace is not too high.

With gradients that consistent, the ascent itself is made for power climbers rather than out-and-out lightweights. The only point where the power climbers may struggle is in a tough section around two kilometres along at around 11.5  per cent, with one ramp rearing to 18 per cent. But barring that one particular segment,  rather than an explosive acceleration by a single rider, for much of the Valico Montescuro there will likely be a war of attrition, with the weaker elements  dropping off the back of the group one by one, thanks to a relentless, but steady pace on the front.

The question of who will lead the charge, though, is a moot one. If Simon Yates (Mitchelton-Scott) is feeling back on form, then the Australian squad could be taking up responsibility at the head of the pack.

But if one lesson was to be learned from Mount Etna, where Geraint Thomas (Ineos Grenadiers) was so widely tipped to be in the thick of the action but who ended up losing twelve minutes on the stage winner, it is that nothing is guaranteed in the first week of this year's Giro d'Italia.

A first category climb of the length of Valicao Montescuro, coming at the end of a day of incessant climbing, is yet another ingredient whose impact will be impossible to calculate beforehand, particularly as it is followed by a dozen, fast kilometres of mostly downhill to the finish town of Camigliatello Silano. On top of which, the weather on Wednesday in south Italy is predicted to be rainy, rendering it more likely that any chinks in GC favourites armour will widen a little further, as well as - regrettably - the chance of crashes.

One rider forecasting a lot of action is GC leader João Almeida (Deceuninck-Quick Step). "It's a hard final, I hope can keep jersey but there will be a lot of attacks for sure," the young Portuguese pro, who holds the lead by two seconds over EF's Jonathan Caicedo, said after stage 4.

But for all Almeida's assured grip on the lead on stage 4, a real power vacuum is currently operating in the Giro's GC battle, and the strongest climbing teams here are either lacking in leaders (Ineos Grenadiers) or their top name's form is uncertain (Mitchelton-Scott).

As a result the way the final ascent on stage 5 of the Giro will be tackled is currently looking very unpredictable, and all options, from an anarchic, open warfare to one where nobody wants to take risks so early in the game, are on the table.