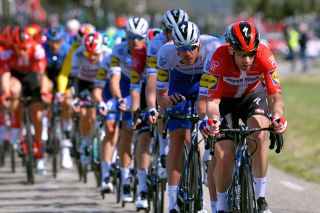 Alongside our special Cyclingnews Domestique Week content, we've created a Twitter poll for readers and fans to decide who is the Cyclingnews 'Best Domestique in the World'.

So far we've held polls to crown the best Classics workhorse, the best sprint support and leadout rider, the best Grand Tour mountain domestique and the best eclectic hard-worker. Now it's is time for the vote off to select the semi-finalists, followed later by the finalists, in order to crown the Cyclingnews Best Domestique in the World.

Tim Declercq (Deceuninck-QuickStep) won the poll for best Classics workhorse, with even teammate Yves Lampaert singing his praises and helping him secure extra votes. The hardworking Belgian, who spoke to Cyclingnews about his life on the front of the peloton, scored 42 per cent of the votes, beating Daniel Oss (Bora-Hansgrohe), who took 27.9 per cent, and Luke Rowe (Team Ineos), on 16 per cent. Michael Schär's hard work for CCC Team leader Greg Van Avermaet was not fully appreciated, and he only scored 4.9 per cent.

Michael Mørkøv gave Deceuninck-QuickStep another rider in the semi-finals, topping the poll for the best sprint-support rider. Former time trial world champion Tony Martin (Jumbo-Visma) was second, recognising his ability to close down breakaways and line out the peloton in the final kilometres of sprint stages.

Mikel Nieve (Mitchelton-Scott) won the poll for best Grand Tour domestique, taking 49 per cent of the vote, while Andrey Amador (Team Ineos) was second with 28.5 per cent.

The next round of the poll sees eight riders fighting it out for the four places in the finals, and your votes on Twitter will decide who makes it through to Friday's final to crown the Cyclingnews Best Domestique in the World.

Vote for the Cyclingnews Best Domestique in the World#CNBestDomestiqueIt's time for the semi-final voteHeat 1 Nominations:April 1, 2020