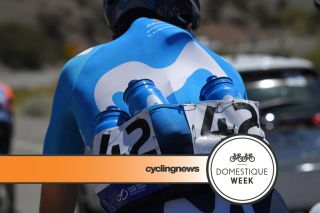 You can vote for the best 'helper' in the bunch (Image credit: Getty Images)
JUMP TO:

Domestiques are the unsung heroes in professional cycling, a sport where a strong team makes the difference between winning and losing, but where only the winner is usually feted and celebrated.

During Cyclingnews' Domestique Week, we want to celebrate the 'Wonderful Losers', as Lithuanian film director Arūnas Matelis called them in his superb documentary.

To help recognise the best domestiques in the current men's peloton, we have created a Twitter poll so that Cyclingnews readers and the riders and teams can vote to elect the 'Best Domestique in world'.

We've selected 16 candidates and will hold daily polls on Twitter so that the most admired domestiques go forward to a final vote at the end of the week. All 16 deserve their place due to the support work they do every day in the saddle or for a specifically distinguished effort they made for their leader and team.

Perhaps the winner will earn a special bonus from their team and sponsors. For sure they will have the bragging rights to the crown of 'best domestique in the world'.

We'd also like to hear your opinions via social media and in the comments sections under each Domestique Week story. We've created the #CNBestDomestique hashtag, so anyone can follow the week-long vote, comment and share.

There are several different kinds of domestique and we've divided the riders into four categories: Classic workhorses; vital sprint support, such as lead-out men; Grand Tour domestiques; and then the unique and eclectic workers such as Adam Hansen (Lotto Soudal) and Alex Howes (EF Pro Cycling).

To take part and show you're support, go onto Twitter and select the rider you want to vote for. In the early rounds, the vote will be between four riders, with the best two going though to the next round. Only two riders will emerge for the final vote at the end of the Cyclingnews Domestique Week.