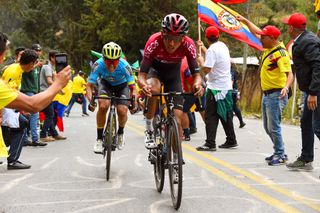 Egan Bernal (Team Ineos) has reiterated that he intends to make his Giro d’Italia debut in 2021 but he acknowledged that his plans could change depending on which Grand Tours, if any, are held this season.

The Colombian was due to ride the Giro in 2019 but changed his schedule after suffering a broken collarbone in a training crash shortly before the race. He went on to ride and win the Tour de France.

Bernal’s 2020 campaign was planned around defending that Tour title, but it is now unclear when the next edition of the race will take place. All racing is suspended until at least June 1 due to the coronavirus pandemic, but some races in June – including the Tour de Suisse, which Bernal won in 2019 – have already been cancelled.

“Riding the Giro is one of the things that I’ve wanted to do since my first season as a professional,” Bernal told Italy’s Sky Sport 24. “I’ve lived in Italy, I have a lot of friends in your country and I know the roads. The idea for this year was to do the Tour and some end of season Classics like Il Lombardia, and then go to the Giro in 2021, but now we need to understand how this season will finish.”

Bernal has raced only in Colombia thus far in 2020, placing third in his national time trial championship, second in the road race and then fourth overall at the Tour Colombia. He was due to make his first WorldTour appearance of the season at Paris-Nice, but his Ineos team withdrew from the race following the death of directeur sportif Nicolas Portal.

The 23-year-old has since returned to his native Colombia, where he underwent a period of self-isolation on his arrival. In February, his regular training partner Óscar Sevilla expressed admiration for how he well Bernal had prepared for the new season despite the demands of being Colombia’s first Tour winner. “I think he must be one of the few riders who has won a Tour de France and already been at his ideal weight the following December,” Sevilla told Cyclingnews.

Having rigorously planned his season around the Tour, Bernal now finds himself training with little idea as to when his campaign will resume and with no certainty as to the eventual date of the next Tour de France.

“In reality, I’m trying not to think about it,” he said. “The situation is so difficult that you can’t speculate about a date. I hope that we can ride it, for me, for my team, for cycling in general and naturally for all the fans.”

Bernal is also auctioning a bike, along with jerseys from the Tour de France, in order to provide food and other supplies for Colombian children during the coronavirus pandemic. He is running the auction to raise money for Fundación Exito, a children's charity.