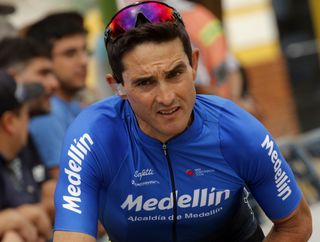 Few riders know Egan Bernal quite like Oscar Sevilla, his regular training partner in the hinterland of Bogota, Colombia. Separated by two decades in age, the Spanish expat and his young companion make for an odd couple, but they have built up a firm friendship over the past six years as Bernal has developed from promising mountain biker to Tour de France champion.

Neither Bernal's passage to the WorldTour with Team Sky (now Team Ineos) nor his maillot jaune have altered the relationship. This winter, it has been business as usual.

"We train together every day when we're both in Colombia," Sevilla told Cyclingnews. "We train with Brandon Rivera, who's also at Ineos now, and some other riders."

At this week's Vuelta a San Juan, Sevilla is competing in the colours of Continental outfit Team Medellin, but his gloves, a gift from Bernal, bear the logo of Team Sky.

Sevilla: I feel very proud and privileged to continue riding

The irony, of course, is that the 43-year-old Sevilla, who was implicated in the Operacion Puerto blood doping inquiry and who tested positive for hydroxyethyl starch in 2010, would never have been able to ride for Team Sky due to the outfit's self-proclaimed 'zero tolerance' policy on doping.

Ineos' stance on its riders training with Sevilla is unclear, but Bernal, for his part, has never downplayed his friendship with the Spaniard, issuing a firm defence of their rapport in an interview with Le Monde last October.

"I didn't know him at the time he was implicated in Operacion Puerto. When I see him, I don't see the cyclist who won big races, I see the friend I have today. If that disturbs you, then sorry," Bernal said on that occasion. "He's still my friend, a great man, great with his family and always available to others. For my reputation, I don't think that is a problem."

The admiration is mutual, with Sevilla lauding the 23-year-old's work ethic, even in the frenetic weeks and months that followed his Tour victory. Bernal became the first Colombian to scale that most imposing of summits and Sevilla marvelled at how the youngster succeeded in sealing himself off from the distractions of celebrity in a country where cyclists enjoy the same renown as footballers.

"Egan won the Tour and that changes your life as a person, but his first objective is always the bike. I think he must be one of the few riders who has won a Tour de France and already been at his ideal weight the following December," Sevilla said.

"It's hard for riders who win the Tour, because they have ceremonies and events to attend, but Egan has kept things very simple. Even after the Tour, he was doing training rides of six hours just to prepare for Il Lombardia."

Despite the generational difference, Sevilla declined to describe their relationship as that of teacher and pupil, and he downplayed the idea that he had much to offer Bernal by way of advice on tactics or training.

"We talk a bit when we're training, but it's a healthy discussion," Sevilla said. "I give him my opinion and he gives me his, and in the end, he analyses it all. He's very intelligent. He really knows how to read a race and read his rivals."

While Sevilla will race against Bernal at the forthcoming Tour Colombia 2.1 in Boyaca, he has encountered another precocious talent at this week's Vuelta a San Juan. He had a chance to assess Remco Evenepoel (Deceuninck-QuickStep) at the closest of quarters on stage 5 to Alto Colorado, when they were both caught on the wrong side of split ahead of the final climb.

At one point, they were 1:18 behind the front group, and Sevilla could be seen grimacing as he strained to hold the younger man's wheel, but they combined to claw back the deficit and preserve their podium spots. "A personal triumph: my head was stronger than my legs," Sevilla said. With one stage left, Evenpoel is on the cusp of overall victory, while Sevilla lies third at 1:01. "Remco is very strong and he has already made another leap in quality from last year," said Sevilla. "He's one of the strongest young riders around these days, with Egan and [Tadej] Pogacar."

Bernal and Pogacar have already placed on the podium of Grand Tours, and the 20-year-old Evenepoel, already winner of the Clásica San Sebastian and the European time trial title, has ambitions of emulating them. It remains to be seen, however, if his aptitudes lie in three-week racing. His Grand Tour debut at this year's Giro d'Italia might reveal more.

"The Giro will be his first real test [as a Grand Tour rider]," Sevilla said. "He'll have to manage racing for three weeks and recovering from one day to the next. But he clearly has huge potential when you see what he's already doing at 20 years of age. Not just any rider can win San Sebastian against guys coming out of the Tour de France."

Evenepoel and Bernal may be far removed in riding styles and cycling background, but Sevilla highlighted one parallel between the pair of young talents. "I think they're very similar in that they are young riders with ambition; they're cannibals. They want to win everything," Sevilla said.

"They're different to other young riders. Other young riders progress gradually, but Egan and Remco are like advanced students, superdotados. I know Egan better, and the things that you notice are his mentality and maturity. He's a warrior. Even in a training ride, he wants to win. And I think Remco is like that as well."

Sevilla, who has amassed a startling palmarès in the decade-long South America coda to his career, tends to last longer than anyone else on those rides with Bernal, 2,600 metres above sea level. "For me, it's a benefit to be able to observe a rider like that in training," Sevilla said. "But he still drops me."