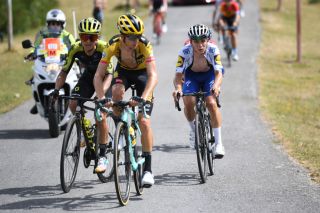 Deceuninck-QuickStep's Remco Evenepoel spread his wings on stage 3 of the Vuelta a Burgos on Thursday, with its summit finish on the Picón Blanco, flying to the victory and the race lead with two days to go of the five-day Spanish stage race. Behind him, Jumbo-Visma's George Bennett limited his losses, coming home second on the stage, 18 seconds down, and now trails the Belgian by the same margin overall.

"That was a great stage, and I'm happy with the result," Bennett said on his team's website following what was a tough and windy 150km stage from Sargentes de La Lora to the Picón Blanco.

"It was a fast stage – very hot and very hard," he explained. "The guys did a really good job at guiding Sepp [Kuss] and me through the echelon chaos and getting us in a good position to the final climb.

"In the echelons, we were in a good group, and I had some great support from the team. As a result, I was certainly able to save a lot of energy. It was a first-class ride to the bottom of the climb," said Bennett.

She's got sole: Fine art and shoes with Caitlin Fielder

"On the climb, Mitchelton-Scott had a very high pace," he said of the Australian WorldTour team, which was trying to position their climber, Esteban Chaves, ahead of the climb. "It was a matter of keeping my rhythm and trying to follow them.

"When Chaves attacked, I didn't hesitate for a moment," said Bennett, "but Evenepoel was just too strong today. We'll see what's in store for us in the coming days. They're going to be two more hard days."

Jumbo-Visma sports director Arthur van Dongen was left very satisfied by both Bennett's form and the work his team did as a whole.

"We've ridden a very good stage as a team," Van Dongen said on Thursday afternoon. "The breakaway was perfectly controlled by Team Ineos and Bora-Hansgrohe, and we rode attentively at the front of the peloton all day to limit the risks.

"But when the wind picked up and the peloton was split to bits in the echelons, there was a lot of chaos and spectacle," he said. "The guys remained calm and supported George and Sepp as well as they could, and George was very, very strong today. It was a good final climb for him.

"During the next two days, we need to stay sharp and focused, especially with the wind here in Burgos," concluded Van Dongen.

The riders face a stage more suited to the sprinters than the climbers on stage 4's 163km run from Bodegas Nabal to Roa de Duero on Friday, although what is a tricky uphill segment in the final kilometre could see the stage hunters whittled down in number, and the GC contenders will need to stay at the front and on the ball if they don't want to ship some vital seconds during the run-in.

Saturday will then provide the final showdown, with another summit finish at Lagunas de Neila, where Bennett and his Jumbo-Visma teammates will do their best to try to overhaul Evenepoel, providing he's still leading at that point.