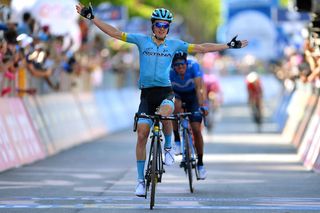 Astana's Pello Bilbao wins stage 20 of the 2019 Giro d'Italia ahead of Movistar's Mikel Landa. The two riders will be teammates at Bahrain-Merida in 2020 (Image credit: Getty Images)

Bahrain-Merida announced on Wednesday the signing of no fewer than six riders for the 2020 season, heralding a new era for the WorldTour team, which has already brought in new Team Principal Rod Ellingworth, who has joined from Team Ineos.

Dimension Data's Mark Cavendish is also rumoured to be joining the team, while the team's partner McLaren – the British Formula 1 team – are set to up their involvement and become a co-sponsor of the outfit in 2020.

Pello Bilbao, Eros Capecchi, Marco Haller, Scott Davies, Kevin Inkelaar and Rafael Valls will add considerable horsepower to a team that has nevertheless lost Vincenzo Nibali and Rohan Dennis ahead of next year. But in tandem with Ellingworth's expertise and experience, and McLaren's augmented role – as well as the already-announced additions of Wout Poels and Mikel Landa to their ranks – Bahrain-Merida could become the team to beat in 2020.

The experienced Capecchi – a Giro stage winner back in 2011 – arrives from Deceuninck-QuickStep, and will provide further climbing support to an already packed, Grand-Tour-capable team, while Haller comes in from Katusha-Alpecin and adds sprinting capabilities and Classics experience to the squad.

Spain's Rafael Valls has spent the past two seasons as a teammate to new signing Landa at Movistar. The 32-year-old took a solo win at Spanish one-day race the Prueba Villafranca-Ordiziako Klasika this season, and will be another rider to rely upon in stage races.

The team's two younger signings – 22-year-old Inkelaar and 24-year-old Davies – join from Groupama-FDJ's Continental-level feeder team and Dimension Data, respectively, and will be called upon to assist the team's leaders while continuing to develop their careers.

"We are thrilled that these six riders will join the team and be part of its future direction with Rod Ellingworth and McLaren," the team's general manager, Brent Copeland, said.