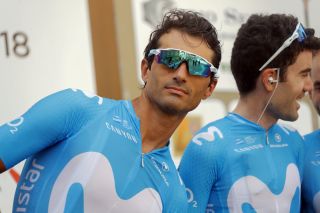 Daniele Bennati retired after the 2019 season due to a back injury (Image credit: Bettiini Photo)

Italian sprinter and trusted road captain Daniele Bennati has announced his retirement, revealing that back pain caused by a vertebra fracture in April has forced him to end his professional career after 18 seasons in the saddle.

Now 39, Bennati had hoped to race a final season with Movistar in 2020 but confirmed his decision to retire in an interview with La Gazzetta dello Sport and on social media.

"'Dear Benna, you've got to climb off.' That's what my back told me a few days ago," Bennati wrote on Instagram, next to a photo of him wheeling his bike away rather than in the saddle.

"I would never have wanted to retire like this but I have to accept it. I've fought hard against the pain in the hope of making a recovery, as if I was sprinting towards the Arc du Triomphe, but it just hasn’t been possible. I can’t blame my back after it supported me for so long and for such a wonderful career."

Bennati turned professional in 2001 with Mapei and spent his early career learning from Mario Cipollini at Acqua e Sapone and Domina Vacanze. His most successful years were spent at Lampre and then Liquigas, where he won sprints at the Vuelta a España, Giro d'Italia and Tour de France.

He won two stages at the 2007 Tour de France, including on the Champs-Élysées, and two at the Vuelta a España. In 2008, he won three stages at the Giro d'Italia and the ciclamino points jersey. An achilles tendon problem also affected several spring Classics campaigns, leaving Bennati without a Classic on his palmarès.

As his sprinting speed eased, Bennati became a trusted road captain for Alberto Contador at Tinkoff and then for Nairo Quintana at Movistar. He also played a similar role in the Italian national team. Fittingly, Bennati's final victory was at the 2016 Giro della Toscana – Memorial Alfredo Martini, close to his home in Arezzo, south of Florence.

His last race was at the Adriatica Ionica Race in Italy as he tried to comeback despite his back pain. however he was forced to retire during the opening stage and realised he faced a difficult comeback, who eventually proved to be impossible.

"I can only thank all the people who have helped achieve my goals, help me fight the cold in the mountains, the heat of the desert, the wind and the rain, so that I could win 54 races," Bennati wrote on Instagram.

"I've climbed off the bike and it's time to start a new adventure but I'm convinced that, whatever happens and whatever I do, my life will always include that special thing that has two wheels and that for me is the meaning of life.

"Cycling is a metaphor for life. When you're in the saddle it's just you and bike. Cycling taught me never to give up and to respect others."

Bennati admitted he has to still plan his future as a former rider but hinted he would love to one day become Italian national coach, perhaps after a spell with a professional team.

He was a reserve in the Italian team 2002 when Cipollini won his world title in Zolder and was often considered a key rider in the Italia Squadra despite a polemic about the 2011 World Championships when Bennati struggled in the hectic sprint finish in Copenhagen and Mark Cavendish took the rainbow jersey.

"I've not yet focused on the future. I can say that I want to stay in the sport," Bennati told La Gazzetta dello Sport. "Me as national coach? That'd be amazing but it's perhaps a long-term ambition. But I think it's premature to talk about now."

"I had contrasting moments in the Italian national team. There where years went well but when I was the leader in Copenhagen it was a huge disappointment. Thanks to my new role of road captain, that Bjarne Riis helped me develop when at Tinkoff and so extend my career, I got back into the national team, which was really nice."