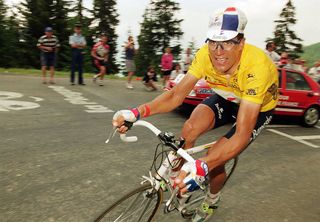 In an interview with Spanish sports daily AS, when asked about Movistar, Indurain pointed out that "there have been a lot of departures."

"I’m puzzled by this abrupt change of direction as it’s a team that normally maintains a very stable structure of riders," Spain’s greatest ever bike rider said.

"Nairo Quintana has gone, and Richard Carapaz, who won the Giro d'Italia," Indurain pointed out. "It’s a strategy Movistar didn’t follow in other years."

"I hope the new signings can keep up the team’s good level, because changes like this can be complicated, although the team will have its reasons for doing what it did. With [Alejandro] Valverde and Enric Mas, assuming he settles in well, we can have some great results."

While losing several top names, Movistar has signed 12 new riders for 2020, including Mas and experienced Astana stage race rider Dario Cataldo of Italy, as well as a host of young riders like Britain’s Gabriel Cullaigh from Team Wiggins, Matteo Jorgensen, who was a stagiaire with AG2R La Mondiale, and 2019 Tour de L’Avenir stage winner Matthias Norsgaard.

Mas is expected to ride the Tour de France in 2020, with Valverde also using the French Grand Tour to prepare for his swansong at the Tokyo Olympics. On Saturday Movistar announced it will use Ale' Clothing after Endura ended its sponsorship.

Indurain was talking to AS after receiving a diploma for his participation from Spain’s Olympic Committee in the Los Angeles Games in 1984. Whilst he abandoned that year road race, his last major success came in Atlanta 1996, when he won gold in the time trial ahead of compatriot Abraham Olano and Britain's Chris Boardman.

"We’ve got some good names, from Valverde, who wants to quit after Tokyo 2020, although that’s a decision he’s yet to finalize, Marc Soler, Mas, the Izagirre brothers and Mikel Landa. They’re all at a good level We’ll see what they can do."