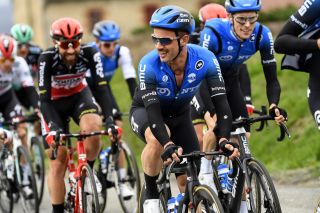 NTT's time-trial specialist, Victor Campenaerts, is not about to attempt to beat his own Hour Record, set in April 2019, any time soon. The Belgian had apparently considered trying to beat his record of 55.089km this April at the London velodrome during the coronavirus lockdown, but the idea was shelved as being unworkable in the current climate of the pandemic.

The two-time European time trial champion's new NTT manager, Bjarne Riis, said on Thursday that an attempt by Campenaerts to try to beat the record he set last year – breaking Bradley Wiggins' 2015 distance of 54.526km – would have been "a nice idea", and that the team would have liked to have backed him, but it wasn't deemed possible.

As part of a Zoom interview with various members of the media, including Cyclingnews – during which he criticised Team Ineos manager Dave Brailsford's recent comments that Ineos would consider not taking part in the Tour de France if he didn't consider it safe – Riis also addressed Campenaerts' wish to try to better his own Hour Record.

"It was a nice idea from Victor, but we knew that he would receive little support from the UCI," said Riis. "There are a number of protocols to follow, and you need a number of people to be involved, so it wasn't realistic. If it had been possible, though, he would have received our full support."

"Victor has raised the bar to an absurd level, but challenges must be accepted, and records are there to be broken," he told Tuttobiciweb. "I know that even my world record in the individual pursuit will be improved upon sooner or later.

"When the near future of racing is decided, and when with the team we have a clearer idea about what to do, I will propose it. If there's time, then why not give it a try?" Ganna said.