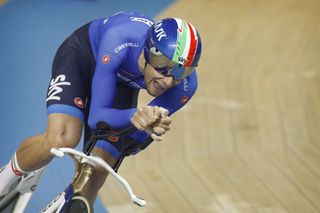 Individual pursuit world record holder Filippo Ganna has once again hinted at a World Hour Record bid, as well as targeting the magical four-minute mark in the individual pursuit.

The Team Ineos rider said in an interview with Tuttobiciweb that he'd like to take on the Hour Record, pointing to the resources of his trade and national teams as a strong support group behind any potential future effort.

The Italian said that Victor Campenaerts' current record of 55.089km, set in Mexico last year, would be hard to beat, though.

"You often ask me about the Hour Record [and] in the many hours I've spent at home in March I thought about it," he told Tuttobiciweb. "I'd like to try it, even if it's far from a guarantee.

"Victor Campenaerts has raised the bar to an absurd level, but challenges must be accepted, and records are there to be broken. I know that even my world record in the individual pursuit will be improved upon sooner or later."

Ganna, like many other pro cyclists, has been stuck at home for the past several weeks as COVID-19 measures have seen numerous European countries go into lockdown.

The 23-year-old, who earlier this season took the individual pursuit rainbow jersey for the third year in a row, has been riding on Zwift frequently and took part in the Digital Swiss 5 races last week.

He said that once the future is clearer, with racing back on the menu, he'd be interested in organising a proper tilt at the Hour Record.

"When the near future of racing is decided, and with the team we will have a clearer idea about what to do, I will propose it. If there's time, then why not give it a try?

"I've never tried it. I don't know what kind of effort it is. Even in normal [racing] situations you take your physique to the extreme, and I remember [Bradley] Wiggins, when he did it, said it was the toughest test of his life.

"Before the end of the year I would've liked to organise an event with the team to try and beat the four-minute barrier in the pursuit, looking for the ideal conditions. I was preparing for that towards the end of the seasons."

"For both of my hypothetical challenges, we should find a fast velodrome, and my team has a lot of experience in this regard," Ganna said. "Just two years ago I thought that going below 4:10 was impossible, but one day I know I'll be able to go below four minutes, which now seems impossible.

"I will rely on the Team Ineos staff but also on the Italy National Team staff, without whom I won't make a move. I don't know if it's clear but being at home without a defined race program I'm going out of my mind so I'm giving birth to these unhealthy ideas."