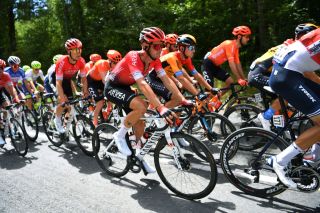 Maxime Bouet – pictured on stage 2 of the 2020 Route d’Occitanie – has signed a contract extension with Arkéa-Samsic that will keep him at the French ProTeam until at least the end of 2021 (Image credit: Getty Images Sport)

UCI ProTeam Arkéa-Samsic – home to the likes of Colombian climber Nairo Quintana and French road race champion Warren Barguil – has handed five riders one-year contract extensions, keeping them at the French team at least through the course of the 2021 season.

General manager Emmanuel Hubert praised Anthony Delaplace, Maxime Bouet, Laurent Pichon, Romain Hardy and Alan Riou for their contributions to the team rewarding them with new contracts as the team continues to grow in stature, having signed Quintana and sprinter Nacer Bouhanni for the 2020 season.

"Maxime is one of the team's executives," Hubert said of Bouet, who's been with the team since 2017, in a team press release on Tuesday. "He is also, above all, an excellent teammate, capable of giving 100 per cent to his leaders. His constant good humor is also important, and reflects on the whole group."

Of Delaplace, Hubert said: "Valorous, loyal, never calculating, Anthony can keep pace at the head of the peloton in order to reduce a gap.

Barguil to make Paris-Roubaix debut in 2020

"He's also an attacking rider who should one day find the opening allowing him to score the great success he deserves so much," he said of the French rider, whose only pro career victory is the 2011 edition of La Poly Normande.

"Discreet but efficient, Romain knows how to win when he is in a position to do so," Hubert described Hardy, who won French one-day race the Tour du Doubs in 2017 and a stage of the Tour du Haut Var back in 2012. "A complete rider, he can climb, can sprint from small groups and is able to blend in for the benefit of the collective whenever necessary."

Twenty-three-year-old Riou, meanwhile, was praised – and rewarded – for his "serious" approach.

"Alan is a young rider who is improving season after season. He doesn't say much, but his seriousness is praised by everyone. He made great progress at the start of the year, and then progressed well again once the season resumed at the Tour d'Occitanie," Hubert said, with Riou having helped Barguil to seventh place overall at the French stage race that finished earlier this week.