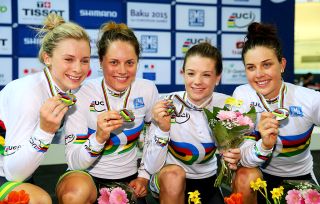 Amy Cure has announced Friday her immediate retirement from international cycling. The Australian enjoyed a 12-year world-class career and was selected to compete in the Tokyo Olympic Games but decided to end her time in the sport earlier than expected following the postponement of the event due to COVID-19 coronavirus.

"It’s one of the most difficult decisions I have had to make,” said Cure in a statement on Cycling Australia. "I feel the same as I do on the start line at an Olympic Games or World Championships. I’m incredibly nervous, but also so excited for the unknown."

Primarily known for her accomplishments on the track, Cure won three world championships; Points Race in 2014, and twice the Team Pursuit in 2015 and 2019. She also won two Commonwealth Games gold medals, has made it to three Australian Olympic Team selections, and secured ten national titles.

"I have settled on this decision for a little while now, and I’m confident I have made the right choice and am excited for the next chapter in my life," said Cure.

"Cycling is and will always be something for which I’ll be forever grateful. It’s taught me so many valuable lessons that have shaped me into the person I am today. I’ve learned to be disciplined, perseverant and optimistic, but I think one of the biggest things I’ve learnt is how to be resilient."

"I’m satisfied with the achievements I’ve accomplished across my career, and my time with the Australian Cycling Team has given me so many incredible things in my life, and I’m so thankful for the opportunities and experiences I have had and the friends I have made," Cure said. "But after making cycling my priority for the last decade, my relationships with family and friends are my priority now."

Cure said she is confident the Australian team will be successful at the Tokyo Olympic Games that have been rescheduled for July 23 to August 8, 2021.

"I really believe they have the girls to give Australia every opportunity of success in Tokyo as they have great depth, talent and coaching. It’s been a difficult decision as I know Glenn O’Shea will be an exceptional coach. That made it hard in my decision making as I know it’s a huge set back in moving forward," Cure said.

"I would much rather allow someone else that has the drive, energy, motivation and potential to be great. I believe they will do just as good, if not better without me there. And there is no doubt in my mind about that."

Cure thanked her coach and mentor Matthew Gilmore along with the Trengove family, who she has lived with during her career. She also thanked her teammates, Cycling Australia and the Tasmanian Institute of Sport, and her family.

"I wouldn’t have achieved what I did without their support," Cure said.