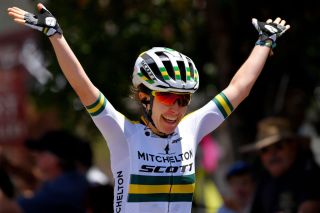 Amanda Spratt of Mitchelton-Scott won stage 2 of the Women's Tour Down Under (Image credit: Getty Images)

Amanda Spratt has signed a two-year contract extension with Mitchelton-Scott that will keep her at the Australian team until the end of 2022.

The news sees the three-time national road champion move into the position of the main leader of the team after the departure of road world champion Annemiek van Vleuten who heads to Movistar next season.

Keeping Spratt on the squad she joined in 2012 is a major sign of the commitment from team owner Gerry Ryan, who has financed both a women’s and men’s team for almost a decade. For Spratt, the decision will ensure that she has more responsibilities over the coming seasons as she leads the line for the women’s WorldTour team.

“I feel like I am at a point in my career where I am really ready to take on the leadership role,” the 32-year-old said.

No distractions for Amanda Spratt as she eyes Worlds glory

“It’s going to come with more pressure, but I think I am ready for that. In the chances I have had to be the leader, I have done a good job so it’s the next progression for me.

“I’m hoping to win races for the team and to still help my teammates win races too. I always have my eyes set on the Ardennes Classics and the Giro Rosa is also a race I want to target and win for the team. I’m really looking forward to turning some of those top-five results into wins and paying back the team’s faith in me."

Spratt has had a hugely successful career on the road with three Tour Down Under titles and a string of European wins to her name. She has been on the podium at the Worlds twice, with silver and bronze medals to her name, but she also believes that her best is yet to come.

“It means a lot to stay. I have been here since the start in 2012 and it really has become like a family to me," she said.

"I am always looking for an environment where I am happy, where I am challenged and where I am also progressing, and I feel like I’m hitting my best years in the last couple of years and I really believe this is the best place to continue that. I want to be more confident in myself sometimes, saving energy for that moment when I know I can win and having a great team around me. I’m confident that it’s going to be really exciting next year to see what we can do."

For Gerry Ryan, who clearly has the utmost respect for Spratt on and of the bike, the contract renewal was about rewarding the rider’s commitment as well as showing faith in her future results.

“Amanda is one of the inaugural members of GreenEDGE Cycling and her contribution to the team, both on and off the bike, is unparalleled. She is the perfect representative of who we are and what we are about,” Ryan said when the team made the announcement.

“She has delivered results for us from our very first national championships, and to watch her continue to grow over the past nine years into the world-class rider we see today has been extremely satisfying. The past two years, in particular, Amanda has shown she can match it with the best – world championship medals don’t come easily – and we’re confident that our additional support and faith in her at the biggest races over the coming two years will be thoroughly rewarded.”