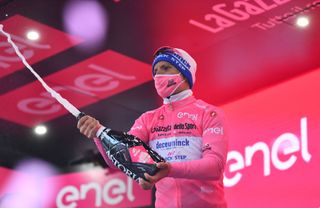 For the second time since he took the lead of the Giro d'Italia on Mount Etna, João Almeida (Deceuninck-QuickStep) thought he could be in trouble on a mountain stage, and for a second time the 22-year-old's fears proved to be totally misplaced.

On an arduous, freezing cold stage 9 featuring more than 4,000 metres of vertical climbing, the Portuguese racer suffered but dug deep on the final ascent to Roccaraso to stay in the maglia rosa.

As a result, Almeida's lead on Kelderman, now his closest pursuer, has been squeezed to 30 seconds, while Bilbao is at 39 seconds. But it is still a fairly significant time cushion for Almeida, at least in the easier stages in the first half of the second week.

Rather than an individual achievement, Almeida attributed his successful resistance as race leader to sterling support from his squad.

"I'm so thankful for my team, if it was not for them today for sure I would have lost the jersey, " Almeida told reporters, "and also it was so cold and I'm not the best guy in those sorts of temperatures for sure.

"50, 60 kilometres from the line, I was sure it was over. But I kept on fighting for my teammates because they really deserved this."

Prior to next Saturday's crunch time trial, the upcoming week of the Giro d'Italia features two flatter days on stages 11 and 13. But stage 10 from Lanciano to Tortoreto is peppered with numerous short, punchy climbs, while stage 12 around Cesenatico is also very challenging.

"Hopefully I can keep the jersey, you never know, there could be crosswinds, anything can happen, but I will fight to the end," Almeida promised.

Almeida's latest day in pink enables him to stretch out another notable record, as the Portuguese rider who has spent the most time in the lead of a Grand Tour. That's two stages more than all-time Portuguese great Joaquim Agostinho, who spent five days at the head of the Vuelta a España overall ranking way back in 1976.

Portuguese cycling had a lot to celebrate in Roccaraso, as Almeida compatriot Ruben Guerreiro (EF Pro Cycling) took the stage win as well. Almeida was so delighted with Guerreiro's triumph, he even interrupted the EF rider's press conference to say "I'm very pleased for Ruben, he's my friend, it's wonderful he's won.

"Today," he concluded, "the Giro speaks Portuguese for sure."