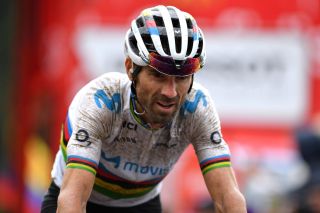 2018 road race world champion Alejandro Valverde (Spain) admits that he doesn't enjoy bad weather, but will nevertheless give it everything to try to defend his title in Yorkshire (Image credit: Getty Images)

Defending road race world champion Alejandro Valverde will proudly lead his Spanish teammates on the 284.5km course between Leeds and Harrogate on Sunday, but has admitted that the expected wet and windy weather won't do him any favours.

"I'm feeling motivated and am looking forward to trying to defend the title," Valverde told Spanish website AS.com on Friday, ahead of the elite men's World Championships road race on Sunday, "but I don't like the look of the weather forecast."

He added that he felt "100 per cent recovered from the efforts of the Vuelta a España", where the Spanish veteran finished second overall behind winner Primoz Roglic, but apparently wrapped up a shortened training ride on the Worlds road race course on Friday morning, declaring, "It's not for me."

However, he'd somewhat changed his mind later the same day after he'd watched Colombia's Sergio Higuita – a fellow climber – race aggressively over the road-race course and finish in fourth place in the under-23 men's event.

"We'll see what happens," was his upgraded response to whether he still fancied his chances.

"Even though I went well in the rain at the Worlds road races in Ponferrada [2014; third place] and Florence [2013; third place], I really don't like the look of the weather forecast for Sunday," he added.

"You have to really be on your toes in bad weather, and constantly eating, despite perhaps having crashes happening all around you. I'd say that, physically, I'm feeling great – even better than before the Worlds in Innsbruck last year – but that the route and expected weather conditions aren't exactly perfect for me.

"But I still think it's a race that will be best suited to more experienced riders, rather than the younger generation that are coming through, and that everyone's talking about," Valverde continued. "Apart from Mathieu van der Poel [Netherlands], who's just so strong."

Valverde also said that he'd enjoyed his season in the rainbow jersey as road race world champion, but that if he had to choose between another world title or a gold medal at the Olympic Games road race in Tokyo next summer, he'd opt for the later.

"An Olympic gold medal is one of the things missing from my palmares," the 39-year-old said. "And the Games might be the last major race of my career.

"But if I do have to pass the rainbow jersey on to someone else, I'm going to make sure that I go down swinging," said Valverde.