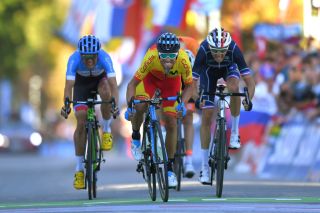 Spain have named their squad for the UCI Road World Championships in Yorkshire, with reigning world champion Alejandro Valverde (Movistar) leading the team once again. His support team has an emphasis on riders familiar with the team leader, to aid teamwork on the Harrogate circuit.

The 39-year-old, who sprinted to victory from a small group in Innsbruck last year, and has just finished second at the Vuelta a España, will be joined by Movistar teammates José Joaquín Rojas, Marc Soler and Imanol Erviti.

A host of ex-Movistar men round out the powerful squad, with Astana trio Ion Izagirre, Gorka Izagirre and Luis León Sánchez included along with Jonathan Castroviejo (Team Ineos). Iván García Cortina (Bahrain-Merida) is the only rider in the nine-man team with no experience riding as Valverde's teammate.

Outside of Valverde, who has five wins this year, including stage 7 at the Vuelta and the Spanish National Championships, Ion Izagirre has had the most successful 2019 campaign. The Basque rider won the Vuelta a Valenciana, Tour of the Basque Country and a stage at Paris-Nice.

Meanwhile, Sánchez took a stage win at the Tour de Suisse and the overall at the Vuelta a Murcia, while Gorka Izagirre won the Tour de la Provence. Cortina, a punchy sprinter, looks to be the main backup for Valverde, though the 23-year-old is untested at a senior Worlds.

"We have designed a very competitive team thinking about the route we are going to find, and how the race will develop, as well as a team that knows Valverde perfectly," said new national team coach Pascual Momparler to Marca.

"Because of the route layout it's going to be difficult to get close to the cars and to give orders easily [there are no race radios – Ed.], especially once we enter the circuit. So it's important that the riders already have an understanding with Valverde."

The first event of the Worlds will be the new 28-kilometre mixed relay event, which was trialled at the European Championships. Spain will send Castroviejo, Mas, Sebastián Mora (Caja Rural-Seguros RGA) and the Movistar women's trio of Lourdes Oyarbide, Mavi García and Sheyla Gutiérrez.

In the women's road race, García, Oyarbide and Gutíerrez will be joined by Ana Santesteban (WNT-Rotor) and trade teammates Eider Merino and Alicia González. Spain's Under-23 and Junior line-ups have yet to be revealed.

A fight for UCI points

Aside from competing for medals and the prestigious rainbow jerseys, Spain will also be fighting for places at the 2020 Olympics in Tokyo.

Only the top six nations in the UCI Olympic Qualification Ranking will take five men to Japan next year and so placings and points in Yorkshire could influence Valverde's hopes of ending his career with Olympic gold.

After the Vuelta a España, Slovenia has moved above Spain into sixth place with 8724.74 points to 8636.12. Belgium, Italy, France, the Netherlands and Colombia occupy the top five places in the rankings.

With the cut-off on the rolling ranking coming at the end of the season on October 27, Spanish riders need to exceed their previous points totals for the season-end period by "at least 100 points" according to Momparler.

For example, last season, Valverde's Worlds win and results in the Italian one-day classics to end the year saw him gain 805 points, all of which will be wiped from the records and replaced by his 2019 points total in those races.

Spain's 290 points apiece at Il Lombardia and the Tour of Guangxi will also need to be matched or improved upon if they are to overhaul the Roglič and Pogačar-boosted Slovenian points total and obtain the full complement of riders for Tokyo.