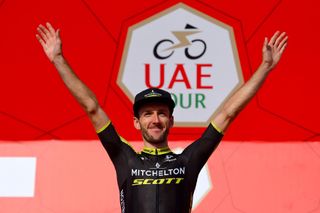 Adam Yates (Mitchelton-Scott) appears to have sewn up his first overall title of the year after a commanding and consummate performance on stage 5 of the UAE Tour on Thursday, and is set to be named as the overall winner following the cancellation of the final two stages due to two confirmed cases of the coronavirus on the race.

The British climber may not have blown the race apart on the climb of Jebel Hafeet, as he did two days prior, but then such a cavalier approach wasn’t required this time around. Instead, Yates made the most of his rivals’ desires to win the stage – most notably UAE Team Emirates – to keep the pace high and then marked all of his main threats to ensure that he kept his overall race lead.

He gave special attention to UAE Team Emirates’ Tadej Pogačar when the Slovenian threw down several attacks, but at several points the pair seemed to work together in distancing the chasing duo of Alexey Lutsenko (Astana) and David Gaudu (Groupama-FDJ).

In the end, both Yates and Pogačar ended the stage with what they required – the Slovenian taking a race-saving win for the home team and Yates solidifying his overall lead. Following the conclusion of the stage, Yates led Pogačar by 1:01 with Lutsenko at 1:33.

"I felt good. For sure, two days ago I got a big advantage but today all I did was stay with other key guys and out of trouble. That's what it is. It's all good," Yates told the media during a concise press conference at the top of the climb.

"Straight from the start we followed the plan and let a small group go up the road and controlled it from there. It got a little nervous with the wind, but the guys looked after me to perfection and delivered me into the bottom of the climb in great position so I could do my thing in the final," he said.

The final two days of the race were destined to end in bunch sprints, but all riders – along with each team's staff members, the race organisers and the attending media – were set to be tested for the coronavirus at their hotels in Abu Dhabi on Thursday night, bringing a premature end to the WorldTour stage race.