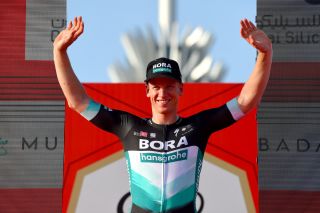 German sprinter Pascal Ackermann will target the Vuelta a España when the cycling season starts back up this autumn, recalibrating his main goal as his Bora-Hansgrohe team seek to maximise their winning opportunities by splitting the calendar between him and Peter Sagan.

While Sagan will head to the Giro d'Italia for the first time in October, following on from his ninth Tour de France participation, while Ackermann will build up with a series of stage races on the way to his Vuelta debut on October 20.

Speaking via video conference from Bora-Hansgrohe's training camp in the Ötztal Alps in Austria, the 26-year-old said that he's happy with his plans for the post-COVID-19 season. Ackermann will get going at the Sibiu Tour, which will welcome WorldTour teams for the first time, before a series of top-level races.

"I'm really happy about my race calendar," Ackermann told a group of journalists, including Cyclingnews. "I'm a bit surprised because I'm starting at the Sibiu Tour. It's a really small race but I think it's a good opportunity to come into the season.

"Afterwards I'll go straight to the Tour de Pologne where I had some good years in the past. The next big goal is Tirreno-Adriatico and then afterwards it's Gent-Wevelgem, BinckBank Tour and then I'll go to the Vuelta at the end of the year."

Ackermann enjoyed a breakthrough season in 2019, adding 13 wins to his palmarès including two stage victories and the points jersey at his debut Grand Tour, the Giro d'Italia. Despite that, he told Cyclingnews at the season-ending Tour of Guangxi that he didn't yet consider himself a top sprinter – even if onlookers might disagree.

The goal this year, then, is to keep the WorldTour victories coming, a target which will be assisted by the team setting differing schedules for their two top sprinters.

"I really like to race in Italy, and I was really looking forward to the Giro d'Italia this year. But with the new race calendar it was not possible to go there because we have not many chances for sprints," Ackermann said.

"Also, along with Peter [Sagan], we have to take every chance to win this year. That's why we've said that one is going to the Giro and one to the Vuelta. That's why we had to change our race calendar a bit, and I'm really happy with it. It's not as much as before but it's still a good one."

As was the case last year, Ackermann will share much of his schedule with lead-out men Rüdiger Selig and Michael Schwarzmann, the trio neighbours and training partners who live on the shores of Lake Constance in Austria. Last year, Selig shared 60 race days with the German, while Schwarzmann was by his side on 55 race days.

With Sagan heading to the Giro, there was not enough space in the line-up for Selig, Schwarzmann and Andreas Schillinger to accompany Ackermann, another factor that led him to head to Spain.

Ackermann added that he's done more training than ever during the COVID-19 lockdown. He began 2020 with wins at the Clásica de Almería and the UAE Tour, and is rearing to get started again in late July.

"I was in really good shape and good mood in the beginning of the year," he said. "Then we had to stop a bit but I'm a bit surprised with how my shape is at this time of the year. Now my main goal is for sure the Vuelta but we're still trying to win as much as possible.

"It's why I'm going to Sibiu, Pologne and Tirreno-Adriatico. I think what I'll do in most of the races are sprints and we're going to try and win as much as possible. We've had good training weeks in the last weeks and we still have some time to go.

"I think I've trained as much as possible in the last weeks and I've never had so much training before. I really look forward to getting back to the races."