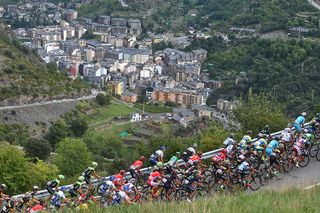 Eight stages in, and the 2019 Vuelta a España remains a game of inches. Just 27 seconds separate the four men who have established themselves as the favourites for overall victory, but one day in Andorra has the potential to open fissures among them.

Stage 9 from Andorra La Vella to Cortals d’Encamp is a mere 94.4km, but with five mountain passes and a total of 3,370 metres of climbing, this stage could prove an outsized one in terms of the final destination of the maillot rojo.

For the time being, that jersey lies on the shoulders of Nicolas Edet (Cofidis) after he infiltrated the day’s early break on the rain-soaked road to Igualada on Saturday, but the Frenchman is likely to prove an ephemeral leader of this race. Holding the jersey as far as Monday’s rest day will surely be the summit of his ambition.

Miguel Angel Lopez (Astana), third at 3:01, is the best-placed of the pre-race favourites, even if the looming Pau time trial on stage 10 prompted Nairo Quintana (Movistar) to suggest that Primoz Roglic (Jumbo-Visma), fourth at 3:07, is the race’s ‘virtual leader.’ Quintana himself is only 27 seconds behind Lopez in 6th overall, while his teammate Alejandro Valverde lies 11 seconds closer in 5th. All to play for, in other words.

That quartet have all displayed sustained flashes of quality during the opening phase of this Vuelta. Lopez was the fleetest of foot on the summit finish at the Alto de Javalambre and has now worn red on three separate occasions. Valverde delivered a rapier sharp finish at Mas de la Costa after Quintana – already a surprising but enterprising winner on stage 2 – had diligently applied the pressure most of the way up the ascent.

Throughout the week, meanwhile, Roglic hasn’t missed a beat, and with Tuesday’s time trial looming on the horizon, the Slovenian could start the second week of the race with all the momentum unless Lopez and the Movistar duo can do something amid the Andorran peaks to arrest his hitherto smooth progress.

“We have to try to take advantage of it. The time trial is coming up on Tuesday and riders like Roglic will certainly do better than us,” Quintana said on Saturday evening. “The more time we can gain on our rivals – if we can gain time – the better.”

Beyond the four leading lights of the opening week, Rafal Majka (Bora-Hansgrohe) will look to continue his solid opening phase, while the short but demanding stage will offer another examination of Tadej Pogacar’s credentials. The UAE Team Emirates youngster has belied his tender years with an assured showing to this point, but he will be mindful that the Andorran offers a very different kind of test to what has come before.

In Andorra, a postage stamp of peaks and valleys, the road is affixed one of two ways – up or down. Cruelly, the road climbs from the very outset of stage 9, even before the official start of the category 1 Coll d’Ordino (8.9km at 5%) after 8km. Before the ascent begins in earnest, riders could be jettisoned off the back, already battling to finish within the time limit.

A long descent does follow from the 1,985m summit, but while the peloton is spared the rigour of climbing all the way to Arcalis, the respite is temporary. The day’s second ascent, the special category Coll de la Gallina, is a brute. A year ago, Enric Mas won the summit finish here on the penultimate day. This time out, the race tackles the ascent from the other side, climbing higher (1910m) and further (12.2km at 8.3%) than in 2018.

Technically, three climbs remain after the riders crest the summit of the Gallina with 37km to go. In practice, the day’s final trio of ascents line up to form a sort of triptych, divided by the briefest of respite.

First up is the category 2 Alto de Comella (4.2km at 8.6%), whose summit comes with 18km remaining. After a short descent of scarcely two miles, the road kicks up once again for the category 2 Alto de Engolasters (4.8km at 8.1%), which is followed by a short false flat that takes the race across a 3.5km gravel track and through a short, unlit tunnel. On re-emerging into the light, the riders then face a purgatorial category 1 ascent to the finish line at Cortals d’Encamp (5.7km at 8.3%).

"That gravel track is in pretty good shape, but it'll give another twist to the whole stage, which will only be three hours long, and that’s going to make it very intense in any case,” said Vuelta technical director Fernando Escartin.

Andorra has a longstanding relationship with the Vuelta – Arcalis, Pal and the Envalira have all featured as finishing climbs over the years – but the race’s shift to Autumn and increased emphasis on mountaintop finishes has seen the principality become something of a fixture on the route in recent seasons.

Alejandro Valverde has twice won on the Vuelta in Andorra – ahead of Dario Frigo atop the Envalira in 2003, and in front of Rodriguez on the Gallina in 2012, the year he returned from his two-year blood doping ban. A year ago, however, the Spaniard faded badly on the final mountain stage in Andorra, where Miguel Angel Lopez performed strongly on the Gallina but had to settle for second behind Enric Mas.

Whereas the Tour de France’s visits to Andorra are still rare enough to be remarkable – making events like Jacques Anquetil’s dramatic descent of the Envalira in 1964 and Jan Ullrich’s solo win at Arcalis linger in the memory all the more – the Vuelta’s incursions into Andorra have become almost a matter of routine. This will be the third year in succession that the race has visited Andorra, and the seventh time in the past decade that the country has played host to the Vuelta.

And yet, there ought to be little routine about Sunday’s stage, which bears such similarities with the Andorran leg of the 2015 Vuelta. That stage also finished atop Cortals d’Encamp and was billed beforehand as the toughest mountain stage in Vuelta history; designed by Andorra resident Joaquim Rodriguez, the stage featured some 5,200 metres of climbing in just 138km. Mikel Landa, seemingly oblivious to team orders, emerged victorious on a day of high drama that saw Chris Froome forced out by a crash, while Fabio Aru divested Tom Dumoulin of the red jersey.

This year’s stage is, in some respects, a scaled back version of that particular epic, though the threat of heavy rain – not to mention the prospect of attacking from the gun – could yet see a similarly attritional afternoon unfold. At the route presentation in December, Andorra resident and 2019 Vuelta winner Simon Yates – an absentee this year – suggested that the brevity of the stage would have an impact on how it is approached.

“That Andorra stage is very short and sometimes, when stages are so short, you can really get everything out, and in the longer ones you have think about keeping something back for the finals,” Yates said. “They can be more tricky, so it depends on how the race is going.”