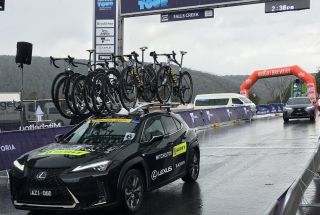 Defending champion Lucy Kennedy’s Mitchelton-Scott team car heads down the descent of Falls Creek to the new start at the bottom of the climb (Image credit: Ellis Bacon)

The second and final stage of the Women's Herald Sun Tour has been reduced by 30km – the opening descent down from the original start at the Falls Creek ski resort – due to safety concerns because of rain and an expected storm.

The race organisers made the decision ahead of time after wet and stormy weather had been forecast on the morning of Thursday's stage, and when the rain started to fall immediately following the finish of stage 2 of the men's race at Falls Creek – won by Sunweb's Jai Hindley – it certainly appeared to be the correct decision.

The riders were taken down the descent in their team cars to start the stage in Mount Beauty, and were set to complete a 15km loop before climbing back up the 30km climb to the original finish.

"After Saturday's crash in the rain at the women's Cadel Evans Great Ocean Road Race, everyone's a bit nervous," women's race director John Trevorrow told reporters, including Cyclingnews, ahead of the stage start. "The roads don't get much more slippery than this. When you've had dry weather for days and then you get a bit of rain, it can be very slippery.

While possible attacks by Kennedy's rivals on the original descent were being predicted in order to try to steal a march on the Australian climber ahead of the final ascent, pretenders to the crown will now have to time their attacks on a considerably shorter stage.

"By the looks of the weather, it's in the interests of our safety to cancel the descent, I think," Kennedy told Cyclingnews. "The climb was always going to be the main part of the stage, so that's still there, and I don't think it's really going to change anything too much.

"To be honest, I think it probably would have stayed together pretty much on the descent; I don't think too many people were really going to attack, but you never know. So it is a pretty short race today – 40-odd kilometres – so for sure it'll be 'on' coming back up the climb," she said.