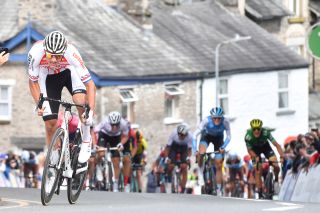 The Tour of Britain is set to visit the Isle of Wight for the first time in 2022, the race announced on Saturday morning. With the 2020 edition of the September stage race called off due to the COVID-19 pandemic, thoughts have instead turned to the future planning with the 2020 route set to be raced next year.

The 2022 edition of the race will end on the island, located on the south coast of England. The race has finished in London for 11 of its 16 editions since relaunching in 2004, though has finished in Cardiff and Manchester in recent years, with the 2021 race set to conclude in Aberdeen.

News of the announcement came in a ceremony in the town of Ryde on the island, which also launched the third edition of the 64-day, 6,700km 'The Great Tour' – a fundraising ride which will see riders circumnavigate the island of Great Britain for charity.

2020 Tour of Britain cancelled due to COVID-19 pandemic

Tour of Britain and Women's Tour will continue without OVO Energy

"This is a wonderful opportunity to showcase the stunning landscapes of the island to an international audience, attracting spectators locally and from afar to enjoy world class cycling," said Isle of Wight council leader Dave Stewart.

"Just as the Isle of Wight is synonymous with sailing, so too I hope we can become a mecca for all things cycling with Tour of Britain and other exciting cycling events in the pipeline."

The planning of future editions of the race comes in spite of title sponsor OVO Energy ending their three-year association with the race and the Women's Tour in November 2019. Race organisers SweetSpot later confirmed that the races were not dependent on sponsorship, however, and that future editions would continue as planned.

"The fact that despite this summer's events we are working ahead with partners and planning the routes for 2021, 2022 and beyond shows that despite adversity, the Tour of Britain will continue to flourish," said Hugh Roberts, managing director of SweetSpot.

"We hope that seeing this news will inspire more people and organisations than ever before to get behind and support our national Tour and to help us reach our goal of making the Tour of Britain the biggest stage race outside of the three Grand Tours by the end of the decade.

The next edition of the Tour of Britain is set to run in September 2021, and will follow the planned route of the 2020 race. Starting in Cornwall on September 5, the race will visit Exeter, Warrington and Cumbria en route to a finish in the Scottish city of Aberdeen on September 12.

Dutchman Mathieu van der Poel won the most recent edition of the Tour of Britain, held last September. The Alpecin-Fenix rider won three stages on his debut at the race, beating Matteo Trentin by 17 seconds in Manchester.