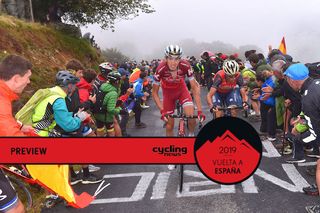 Joaquim Rodriguez: Roglic has 90 per cent chance of winning the Vuelta a España

Back at the 2017 Vuelta a España, Chris Froome said he expected the summit finish of Los Machucos to be “like riding up a wall”, and when the riders at this year’s Vuelta tackle its fearsome ramps of up to 28 per cent for stage 13 on Friday, they’ll surely have the same feeling  the Briton predicted two years ago.

After all, next to nothing has changed in the last few decades, let alone the last two years, in the area of Cantabria where Los Machucos is situated – a remote, rural part of northern Spain where cattle roam unhindered by fences, motorised traffic is rare and, for a large part of the year, the rain teems down on the lush, empty green countryside and wild moorlands.  And Los Machucos, as a climb, remains equally unforgiving.

Often compared to the Angliru climb in nearby Asturias in terms of its brutal steepness,  at 7.4 kilometres rather than 12 kilometres long, Los Machucos, first tackled in 2017, is notably shorter than the Vuelta a España’s best known ascent. But with an average gradient of 12 per cent and several segments at well over 20 per cent, Los Machucos is almost as daunting as its Asturian cousin.

Like the Angliru, Los Machucos has its origin in cattle herding, starting life as a track for shifting cows from one upland pasture to another, and only gaining a tarmac surface between 2003 and 2007. Indeed, the Machucos stage ‘subtitle’ of Monumento al Vaca Pasiega means the “Monument to the Pasiega Cow”, and there is a metal version of said bovine at the top of the  climb.

For the record, the Pasiega is a popular local breed of milking cow, and a key part of the region’s agriculture, with a “mistrustful but docile temperament” – according to Wikipedia, at least – that wanders freely in the area.  Apart from milk, roaming Pasiega cows also create a fair amount of churned-up mud and dung on Los Machucos, and even if the surface muck is cleared away for the sake of the stage, the residue risks making its steep roads even more slippery. That’ll be particularly true if it rains, as it is forecast to do in the morning of the stage.

More than the odd wandering cow and what it can leave behind, the much more notable challenge to riders at the end of stage 13 will be the Machucos’ brutally steep ramps themselves, some of which are simply covered with cement, and not even tarmac.

“It’s a series of steps, so it’s not as continuously hard as the Angliru, and there are a few small downhill segments,” Basque cycling journalist Jesus Gomez Peña of El Correo Español, who  rode up Los Machucos in 2016, tells Cyclingnews. But it has a very hard start, and it’s also very narrow. They’ll need a 34 or a 36 chainring to get up it.

“It starts off just outside the hamlet of Bustablado at the foot of the Machucos,” he continues. “There’s a little ramp, which makes you think you’ve started the climb, then a curve to the left, a very narrow drop down, and then we’re onto the climb itself.

“The first ramp is unbelievably hard, so positioning will be important. It’s maybe 17 or 18 per cent, and about 400 metres long, so it’s going make for some big differences.

“Then there’s a little rest, another ramp, and then we’re onto a cement section, which if it has rained could be particularly tough. You can’t get out of the saddle without skidding,” he says.

The riders move off the cement and back onto normal roads for the last third of the climb, which is not so hard as the middle and the lower slopes, with sections that reach around 12 per cent. But by then the real damage between the GC riders will surely have been done.

That’s not just because of Los Machucos, either – the  stage itself is also a lot tougher than in 2017.  For one thing, it has 3,730 metres of vertical climbing, which is about 400 metres more than two years ago.

But the biggest difference is that whereas in 2017 Los Machucos was preceded ‘only’ by a second- and first-category ascent, this time around the approach is much more irregular, with two second-category climbs and four third-categories dotted throughout the stage. So much climbing and descending means far more changes of pace to test the riders’ endurance and stress levels prior to Los Machucos itself.

The main challenge of the day is unquestionably Los Machucos. As Froome found to his cost in 2017, an ascent as tough as this one can quickly detect any weaknesses in riders who dare to tackle it.

The pre-stage scenario compared to the present Vuelta is, in some ways, startlingly similar. Back in 2017, prior to Los Machucos, Froome had hammered the opposition in the time trial in La Rioja the day before, and Vincenzo Nibali was his closest rival at two minutes.

This time around, race leader Primoz Roglic (Jumbo-Visma), having kicked the opposition into touch in the Pau time trial, holds an advantage of nearly two minutes over second-placed Alejandro Valverde (Movistar).

Could history repeat itself and Roglic find himself in trouble on his first major mountain challenge when in the Vuelta lead? Certainly Los Machucos is an ascent that is so tough that Roglic's much-vaunted climbing support in the Jumbo-Visma team will be of little use; rather, it is a question of each rider fending for himself, and praying he doesn’t crack in the process.

If Movistar and Miguel Angel Lopez (Astana) are going to live up to their promises that they’ll attack the race leader, then Los Machucos could be a very good place to start. However, Tadej Pogacar (UAE Team Emirates) has already taken one mountain-top win and this could be another opportunity for the young Slovenian.

The other possible scenario, of course, if Roglic proves to be in great shape, is that Los Machucos could be the place where the Slovenian deals a knock-out blow to his rivals en route to outright victory in Madrid.