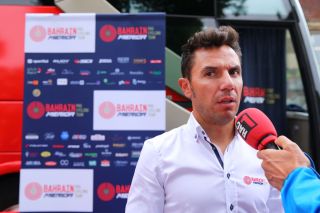 There may still be nine stages to go in the Vuelta a España, but former racer turned commentator Joaquim Rodriguez believes that Primoz Roglic (Jumbo-Visma) already has a '90 percent chance' of winning the race outright.

"I'd give him nine chances out of 10 of winning," Rodriguez, a multiple Grand Tour podium finisher who led the Vuelta on several occasions, told Cyclingnews earlier this week.

"Of all the top favourites, Primoz is the one who's had the most bad luck so far, with his two crashes, in the team time trial and again in the stage to Andorra. But despite these problems, he's the GC who's been able to bounce back the strongest each time."

Roglic goes into the first of three crucial mountain stages with a solid advantage of 1:52 over Alejandro Valverde (Movistar). But even after the Slovenian has shown his strength on all fronts, 'Purito' is expecting major fireworks on the Vuelta's different summit finishes that are still to come, mainly from Roglic's rivals.

"If you look at the way the Vuelta has gone so far, the climbing specialists have been attacking him as hard as they can and wherever they can because they knew that he'd get a big advantage in the time trial," Rodriguez added.

"So far they haven't been that successful because he's been in excellent climbing form, too. But I think they have to keep on trying, and hoping that he has a bad day."

Rodriguez said the Vuelta a España's first week was spectacular partly because riders like Nairo Quintana (Movistar) had been willing to take risks in ways they had not done so often in the past and go on the attack.

"If you look at how Nairo's been going for it, you'll see it's very different to the way he's raced in the last few years. And [Miguel Angel] Lopez (Astana) is going for it as well, attacking from 20 kilometres out. Tadej Pogacar (UAE Team Emirates), could be a really interesting factor, too

"For sure, Pogacar's already shown he's got great form, and on top of that, he's got nothing to lose. He can take more risks than others - he could even get on the final podium."

Rodriguez says that Jumbo-Visma, even after Stephen Kruijswijk was forced to abandon, remains one of the two strongest teams in this year's Vuelta a España, together with Astana.

"Astana could well change their strategy in the stages to come," Rodriguez warned, "not with Lopez, who'll stay as their leader, of course but with how his teammates are racing."

That change of strategy, Rodriguez believes, could impact on how the Vuelta plays out in the mountains, even if Roglic remains his top favourite for now.