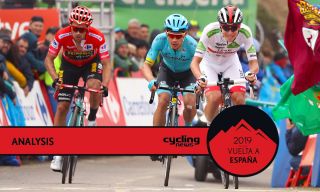 With five days left to go in the Vuelta a España, Primoz Roglic (Jumbo-Visma) may be all but unassailable as the overall leader, but the fight for the podium places next to Roglic on Sunday in Madrid is hotting up with each mountain stage that goes back.

Closest rival Alejandro Valverde (Movistar Team) stands 2:42 back on Roglic, a distance that looks all but impossible for El Bala to bridge. Roglic's consistency to date, barring one possible wobble on Monday near the summit of La Cubilla, and his team's glaring superiority on the climbs, make it very unlikely that the Slovenian will crack.

However, behind Valverde, who did show signs of weakness on the same climb, Tadej Pogacar (UEA Team Emirates) is just 56 seconds back in third, whilst Miguel Angel Lopez (Astana Pro Team) is a further 17 seconds down.

Rafal Majka (Bora-Hansgrohe), who has been steadily climbing upwards the lower ranks of the overall in the past week, rounds out the top five just ahead of a fading and ill Nairo Quintana (Movistar). With nearly four minutes between the Majka and Lopez, barring major surprises, the former Vuelta podium finisher has now reached the top rung of his own particular GC ladder.

But is the GC battle for la roja really over? On the rest day, Movistar were making much of the way the Vuelta has, in the past, had surprise changes of the leader in the sierras near Madrid even when the final finishing line was all but in sight, and recent Vueltas back them up, too.

A lesson in history

In 2015 Fabio Aru emerged to oust Tom Dumoulin on a virtually identical stage, barring the start and finish towns, to stage 18 of this year. In 2003 Roberto Heras sank Isidro Nozal in the mountain time trial of the nearby town of El Escorial, whilst in 1985, Pedro Delgado and a Spanish alliance ousted Robert Millar from the lead in the same mountains west of the Spanish capital.

Most famously of all – albeit in the sierras of Gredos, a little further west, which this year's Vuelta visits on stage 20 – Bernard Hinault delivered one of his best-known Grand Tour performances to push Julian Gorospe, when he was riding for Movistar's earliest incarnation, Reynolds, out of the lead.

However, the critical difference between all of these historical examples is that Roglic has a far stronger team than any of these defeated riders did, except for Isidro Nozal's ONCE-Eroski squad. Yet Nozal only cracked definitively in the final mountain time trial, not a mass start stage, even if the ONCE leader looked vulnerable when Heras attacked the day before on the Navacerrada pass – which the 2019 peloton will tackle on Thursday.

The podium in play

But even leaving Roglic out of the equation, Valverde's second place looks far from set in stone. As stage 16 winner Jakob Fuglsang (Astana) observed, Valverde's relative weakness on La Cubilla could be a result of the Spaniard backing up the Tour de France and the Vuelta, whereas Lopez, of course, rode the Giro and is therefore that much more rested, whilst this is Pogacar's first-ever Grand Tour.

Furthermore, Valverde has spent much of the past three days pointing to Roglic's alleged tendency for weakness in the third week of a Grand Tour. But last year, of course, it was Valverde who fell off the pace and out of the podium in the Vuelta's final weekend in Andorra – and it was Lopez who moved up to third overall on the Vuelta's very last mountain stage of 2018.

Lopez's performance, though, has been more uneven than Valverde's in this year's race. Having led the Vuelta on three separate occasions in the first week, twice after mountainous stages, his second week has been much more of a rollercoaster, with two weaker performances on Los Machos and El Acebo and then a considerable improvement on La Cubilla.

Going into his first-ever Grand Tour, Pogacar's GC potential is also an unknown, not only for the rest of the GC peloton, but for himself as well. As the 20-year-old's team staff point out, even if the Slovenian went home now, his Vuelta has been a breakthrough achievement regardless.

The flip side of raising his bar so massively is that if there ever was an example of a rider racing for GC with absolutely nothing to lose, it's Pogacar. Could the new kid on the block suddenly decide to go for broke to try and push Valverde out of second, at the very least? Or will he suddenly falter at the final fences? Either, on paper, could happen.

This 2019 Vuelta a Espana may be lacking the cliffhanger finales of some of its best recent editions when it comes to the most likely overall winner, but there are plenty of engaging subplots left to resolve, and the podium fight is likely to be the biggest.