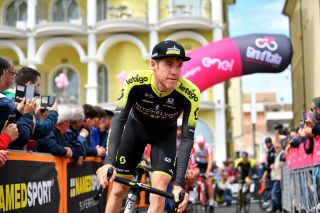 The sun poured down like honey on the Parc du Mont-Royal as the peloton readied itself for the recent Grand Prix Cycliste de Montréal. Motivation varies wildly at this point in an already wearying season, and an eclectic bunch of riders have made the journey to Canada.

Bookwalter out of Tour of Britain after crashing into parked car

Some marquee names have been drawn across the Atlantic by the lure of a top-class competition in preparation for the World Championships, but for others, the Canadian races are simply one more fixture to fulfil before the campaign peters to an end.

Somewhere in between come those who have yet to sign contracts for next season. Since the transfer window formally opened on August 1, they have occupied a state somewhere between fear and hope.

The people they talk to don't say yes but they don't exactly say no, either. That is enough to keep them raging against the dying of the light. What else can they do?

This Autumn, Brent Bookwalter finds himself among their number for the first time in his career. The American spent eleven seasons in the colours of BMC, and while tenured positions don't exist in professional cycling, he was all but a part of the fittings at the American-Swiss squad. A guarantee. One year, he even renewed his contract in February.

Bookwalter moved across to Mitchelton-Scott ahead of the 2019 campaign on a one-year contract. He was immediately ring-fenced to form part of Simon Yates' guard at the Giro d'Italia, and he rode a heavy early-season programme in preparation for the corsa rosa.

Since abandoning at the beginning of the final week, however, he has had to subsist on a meagre diet of racing. For the first time in his career, approaches the end of a season with no assurances of employment for the next, and berths are quickly filling up on Mitchelton-Scott.

"I guess what I've gotten from them is not a no and not a yes at this point, so it's up in the air," Bookwalter tells Cyclingnews on the eve of the GP de Montréal.

Cycling lore is replete with tales of riders who were in the direst of straits only to salvage their careers with late-season victories. Legend has it, for instance, that Oscar Freire was already resigned to seeking work in a Torrelavega paper mill when he landed the World Championships in Verona in 1999.

But while a win in the final weeks of the year would draw welcome attention to Bookwalter's ability – and his current plight – it would hardly be indicative of what he would offer a prospective employer.

Bookwalter's calling card as a professional has never billed him as a winner. He has three victories to his name – stages at the Tour of Qatar, USA Pro Challenge and the Tour of Utah – but the identity he has carved out for himself is that of the consummate team man.

Early on, he was part of the BMC guard that helped Cadel Evans to victory on the 2011 Tour de France and his longevity as a professional since has been built around his reliability, his readiness for duty throughout the year, on all terrains and in all conditions.

"I'd like to think that a 10 or 15-year history counts more than any one-day performance and I think logically it does, but as we see time and again, all of us are so defined on our last race and our last performance," Bookwalter says.

"I think my role when I came to this team was as an experienced, more veteran rider who could support the team on the bike with performances but also encourage and nurture some of the promising talents the team has. That in itself is not conducive to results, but that's the tough dynamic we see in this sport."

For many riders in Bookwalter's position, the temptation is to pull the earpiece out in the final races of the season and try to snatch the result that might save their jobs. The 35-year-old has considered it, but also realised the absurdity of the idea that a victory might secure his future as a domestique.

It would be akin to a stonemason being hired based on his ability to paint a façade. A decade of robust WorldTour service should not require window dressing.

"I think I'd be lying if I said it didn't cross my mind, that I need to do something for myself, to create value for myself," Bookwalter says.

"But at the end of the day I think it's more important that I stay true and committed to the character and the professional I am, and that is being a good teammate."

In Montreal, as in Quebec City two days earlier, Bookwalter is as good as his word. He rides on behalf of Mitchelton-Scott's designated leaders Adam Yates and Jack Haig, performing his duty as though his future wasn't unwritten. What else can he do?

Bookwalter's route to the current impasse began at the Giro in May, where, for the first time in ten Grand Tour starts, he was forced to abandon.

After struggling with illness through the second week of the race, Bookwalter withdrew ahead of stage 16. If he had pulled the plug sooner, he might have recovered in time to race in June. Instead, Bookwalter wouldn't pin on a number again for more than two months.

"The priority after the Giro was to make sure I was healthy and not rush back too soon, but like many teams, Mitchelton-Scott doesn't do anything else during the Tour, so that's a big open month and that left a big block of time," Bookwalter says.

By the time he finally returned to competition at the Clàsica San Sebastian in early August, Bookwalter was already aware that he was riding for his future, an essentially alien sensation after his unbroken stint at BMC.

"The management there saw that I rode better when I wasn't up for contract," he says. "That doesn't mean there weren't tense moments when there were battles to keep myself going there, but the idea of signing in August or September – or even December, as guys do – was never really a reality for me until now."

Part of Bookwalter's job hunt is being conducted by his long-term agent, but many of the leads come from being on the wavelength within the peloton. The mechanics of the marquee transfers may draw the attention, but any rider who agrees to a contract at this point of the season will inevitably have travelled a tortuous route towards signing it.

"I'm a little bit non-traditional in that I have spent almost my whole career on one team, so I don't have this relationship with every team director and rider. Along with that, my agent Derek is not a traditional cycling agent, he's really like a long-term friend from where I grew up," Bookwalter says.

At 35 years of age, Bookwalter believes he still has several seasons of value yet to give, though he is aware that few riders leave The Show at the time and place of their choosing. When Bookwalter witnessed Markel Irizar bring the curtain down on his career amid a festive atmosphere at his home race in San Sebastian, it was a rare example of a rider departing on his own terms. The problem for riders who are seeking to extend their careers, however, is that the terms of engagement are not entirely clear. They are forced to travel blind.

For much of the WorldTour's existence, riders have complained that the focus on points has diminished the role of the domestique to the brink of extinction. Tentative changes to the points system rolled out in recent seasons were ostensibly designed to ease some of the pressure on riders to score points in order to survive at this level, but the ongoing lack of clarity over the UCI's planned reforms for the 2020 season has only added to the uncertainty about what is required to secure a job with a WorldTour team.

"The value in the points changes so much from team to team. There will be one team who values a WorldTour point at so many theoretical dollars and another team who doesn't care at all," Bookwalter says. "It's kind of hard to keep track of what a WorldTour point is even worth."

Perhaps more pressingly, cycling's transfer structure gives a certain degree of leverage to a caste of top riders in early summer, but the balance of power remains firmly with the teams thereafter. Following an initial burst of transfer activity when the window formally opens on August 1, teams seem content to run down the clock on – and drive down the salaries of – increasingly desperate riders as they slowly fill out their rosters for the following season. Bookwalter is an advocate of a transfer window with a defined beginning and end, as is the case in football.

"It never really closes, and you can see that continually drive riders' value down," Bookwalter says. "All of us are doing this because we love it and we want to race. Teams know that if they come to a rider in October or November, when there's pretty much nothing left in the race season, they can slice it [the contract] in half or knock a chunk off the top. If there was a more condensed two or four-week period, teams would be like, 'Ok, if I want him, I have to snap him up.' That would let guys and teams move on and get on with their lives."

Bookwalter's critique owes as much to his role as a shop steward for the peloton – he is on the board of ANAPRC, the North American riders' union – as to his current ordeal. Should no solution be forthcoming, he would depart the professional peloton without rancour, even if the Lees-McRae graduate is not yet giving full consideration to an existence beyond cycling. "I think some good advice I got was, 'Be 110% in until you're not.' For now, I'm still in, but I can't say it's not on my mind."

After racing in Canada, Bookwalter will line out at the Tour of Croatia, Milano-Torino and the Tour of Guangxi, ever hopeful that these races will not constitute the final acts of his career but sober enough to understand that they might. He will draw heart, too, from the doleful fact that his situation is anything but rare. The men battling for those last contracts this Autumn are united by their predicament rather than divided by it.

"I don't feel like I'm out there tempted to put a stick in someone's spokes," Bookwalter laughs. "There's a bit of compassion and empathy between guys. We all kind of look at each other and go, 'It's tough out there. Wish you well and hope it works out.' You want to see everybody be able to go out on their own terms.

"That's sort of the fairytale, but life's not always fairytales."