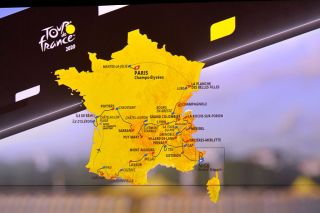 The 2020 Tour de France, Thibaut Pinot said at the presentation at the Palais des Congrès on Tuesday, will be a battle every day. Race director Christian Prudhomme spoke of a need to "make things as varied as possible" in a bid to counteract zapping, and so he has created a sort of don’t-touch-that-dial Tour, where almost every stage seems to feature a potential platform for attacks or pitfall for potential winners.

On a route filled with so many possibilities, it is difficult to single out five key stages from the rest, but, as ever, a number of likely rendezvous leapt off the page when the route map was unveiled in Paris, some novel and some familiar.

The Tour makes a foray into the Alps on stage 2, but the Col de la Colmiane and Col de Turini surely come too far from the finish to provoke lasting gaps among the men with designs on final overall victory. There will be no such reprieve two days later, however, when the race takes in a tone-setting summit finish at Orcières-Merlette, which returns to the Tour after a 31-year hiatus.

In years past, the Tour has paid cursory early visits to the high mountains – the crossing of the Pyrenees in 1992 after the San Sebastián Grand Départ springs to mind – but this is something altogether different. By the summit of Orcières-Merlette, some lofty names will already be revising their GC aspirations downwards before the calendar has even flipped into July.

Just shy of 100 miles in length, stage 4 takes the peloton on an increasingly rugged trek from Sisteron through the mountains around Dévoluy, though race director Christian Prudhomme insists that this opening phase "isn’t made to split the pack too much".

The finish at Orcières-Merlette, on the other hand, is designed with that purpose expressly in mind. The final ascent is 7.1km in length with an average gradient of 6.7 per cent, climbing to an altitude of 1825m. The raw statistics aren’t the gaudiest and the climb isn’t the most daunting, but the devil is in the detail, as Alasdair Fotheringham points out in Reckless, his biography of the Luis Ocaña: "There are no false flats in which to catch your breath and limit the damage."

Orcières-Merlette, of course, is indelibly linked with the late Ocaña, who produced one of the most remarkable exploits in Tour history when he won after a solo raid of more than 60km in 1971. Indeed, Ocaña didn’t simply win the stage and take the yellow jersey; he beat the hitherto unbeatable Eddy Merckx (third on the stage) by almost nine minutes. The Spaniard looked every inch the Tour winner when he withstood Merckx’s fearsome response on the road to Marseille two days later, only to crash out of the race on the rain-soaked descent of the Col de Menté on the first day in the Pyrenees.

When the Tour route was unveiled on Tuesday morning, the eye was naturally drawn to the novel stages and new summit finishes in the Massif Central but, despite the notable absence of old friends like the Col du Tourmalet and the Col d’Aubisque, the race’s brief visit to the Pyrenees on the second weekend is not to be underestimated.

The first installment, in particular, stands out as a potentially pivotal stage on the 2020 Tour. After a gentle preamble from Cazères-sur-Garonne, the terrain becomes altogether more demanding in the final 100km, starting with the climb of the Col de Menté, whose underwhelming statistics (18km at 4.6 per cent) mask the fact that the ascent is a very difficult one in the final 10km or so from Pont de l’Oile.

After descending to Saint-Beat, the road climbs once again on the hors catégorie Port de Balès, which grinds interminably upwards at 7.7 per cent. First introduced to the Tour in 2007, the ascent was the site of the Andy Schleck and Alberto Contador’s contretemps – ‘chain-gate’ – on the 2010 Tour, though that polemic would later be overshadowed by Contador’s positive test, which saw overall victory eventually assigned to Schleck.

There is little respite between the Port de Balès and the day’s final climb, the Col de Peyresourde, the summit of which comes just 9km from the finish in Loudenvielle. In 2016, Chris Froome produced a remarkable descent of the Peyresourde to win in Luchon, while Rodolfo Massi held off Marco Pantani on the same finale in 1998. This time out, the peloton tackles the Peyresourde from the opposite side, but a similarly white-knuckle finale could ensue.

The second week of the Tour brings the race away from the Pyrenees and back towards its dénouement in the Alps, but it is anything but transitional. Stage 13 through the Massif Central to Puy Mary features some 4,400 metres of total climbing, for instance, while this leg into the Jura is among the toughest of the race and arrives at a crucial moment on the eve of the second rest day.

The day’s main obstacles are shoehorned into the final part of the stage, starting after 100km with the Montée de la Selle de Fromental (11.1km at 8.1 per cent), where the gradient flits between 12 and 14.5 per cent for the last three kilometres. After a sweeping descent to Lochieu, the road climbs immediately up the Col de la Biche (6.9km at 8.9 per cent), which incorporates a bracing series of double-digit ramps a little after its midpoint.

The grand finale comes from the Grand Colombier, which is scaled in three parts from Culoz for a total of 17.4km of climbing at an average of 7.1 per cent. The opening segment is the most demanding, with long ramps in excess of 10 per cent before the gradient abates for 1500 metres or so at the 7km mark. The road rears up again thereafter and reaches 12 per cent before it eases into a short plateau at La Sapette. Again, it is but a temporary respite, as the gradient stiffens again in the final 3km, including a wickedly steep run to the finish line.

The Tour’s maiden visit to the Grand Colombier came only in 2012 and this is its first time to feature as a summit finish, but the climb has long been the centrepiece of the Tour de l’Ain. Thibaut Pinot knows it better than most. He won atop the Grand Colombier as a youngster in 2011 and then laid down a marker for the 2019 Tour with a dominant, early-morning triumph there in May.

There are only two mountain passes on stage 17, but that is the smallest of mercies given that they are the two highest climbs on the entire route. On a Tour laden with mountain stages and novel climbs, this stands out above the rest – quite literally, as it features the only climbs above 2,000 metres in altitude.

The Col de la Madeleine (17.1km at 8.4 per cent) has been a Tour staple since it was first included on the road in 1969, featuring on average every other year during the race’s crossing of the Alps. In 2020, the Tour tackles the mighty pass from Notre-Dame-du-Cruet. There is a brutal introduction, as the gradient scarcely drops below 10 per cent in the first 4km, and there is little relief to be had on the long haul towards its 2,000m-high summit.

After the long drop off the Madeleine, the route swings onto the novel and exceedingly demanding ascent of the Col de la Loze, which makes its debut on the Tour having been road tested on the Tour de l’Avenir in August in a short but sharp 23.1km stage won by Australian Alex Evans. The Col de la Loze carries the triple threat of its altitude (2304m), its length (21.5km) and its extreme gradient, particularly in the freshly paved final 7km past Meribel, which is open only to cyclists.

The overall average gradient is a stiff 7.8 per cent, but the sting lies very much in the tail of this mammoth climb, which features gradients of up to 20 per cent inside the final 4km. "There’s nothing regular about it, because the road passes from flat to 20 per cent and then back to 10 per cent. You have to change rhythm all the time, which rouleurs don’t like," the Tour's technical director Thierry Gouvenou told AFP. "I can’t find a similar place, it’s a unique road in France. Knowing the effects of altitude on the body, it’s going to be the most complicated finish for the riders to manage. It's the queen stage of the Tour."

In the opening years of this century, the Tour routinely featured 100km of time trialling, but that figure has dropped gradually in the intervening period, reaching a modern low in 2020. The Tour’s lone time trial is just 36km in length, comes on the penultimate day of the race, and finishes with a 6km climb, prompting some to lament that the discipline is being phased out altogether.

On closer inspection, however, the quality of a Tour contender’s time trialling has remained a key part of his armoury even as the quantity of kilometres against the watch have diminished. In an era where mountaintop finishes seem to provoke ever smaller gaps, even the shortest of time trials have opened chasms between contenders. Witness, for instance, the 2017 Tour, where Romain Bardet had Chris Froome’s measure in the high mountains, but had to settle for third overall, 2:20 behind the Briton, after conceding 2:36 across the race’s two short time trials, which totalled 36.5km in length.

In other words, the importance of time trialling cannot be underestimated even in 2020. The lone test may seem to be bolted onto the race as an afterthought, but it will weigh heavily on the minds of men like Egan Bernal and Thibaut Pinot throughout the race. If they want to win the Tour, they must distance the likes of Primoz Roglic and Tom Dumoulin irretrievably before this final test.

This is, of course, no regular time trial, given it finishes above 1,000 metres after the stiff 6km haul up La Planche des Belles Filles. That finale highlights just how much ASO have weighted this Tour in favour of climbers, but it would be remiss to describe this simply as a mountain time trial. If recent history is a guide, the opening 30km are every bit as likely to create gaps as the final haul to the line.