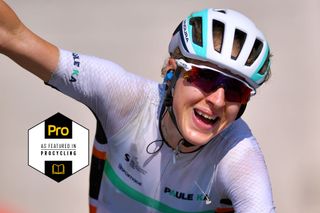 Lizzy Banks (Equipe Paule Ka) won stage 4 of the 2020 Giro Rosa into Tivoli, in what was her second career stage win at the women's Grand Tour after winning stage 8 into Maniago last year.

Procycling sat down with Lizzy Banks after she won her first stage at the Giro Rosa last summer, and she explained her rise through cycling in her own words.

This article was taken from Procycling magazine issue 260, October 2019.

"I loved sport as a kid but didn’t have the opportunities. I didn’t have parents who could take me to hockey practice, parents who would buy me bikes and take me to races. I was fortunate in other ways, but I never had the opportunity to tap into that love of sport. I’ve always been very competitive, so when I accidentally created this opportunity by going on a touring holiday and getting really fit by cycling to university placement and racing Strava for all the QOMs – I was like, suddenly I’ve got this fitness. It snowballed out of control so fast."

I've got the power

"I’ve always been strong. There’s a funny photo I saw from my second or third race, a circuit race. There’s the bunch and then about five metres to the side there’s me, because I’d never ridden in a group. I had no idea what I was doing. Riding in a group, learning when to use your energy... I would just ride on the front because I was like, why wouldn’t you ride on the front? The first ever race I did was a one-hour race on a motor-racing circuit. Halfway through, I took a gel. Who even does that? I didn’t realise that if I was suddenly off the back of the group it would be 50 per cent harder. I got dropped and then I was like, what the hell? I spent the next three laps drilling it as hard as I could. It’s those kind of things that I didn’t know."

"I started racing in February 2015, and then I was racing all through that season. I didn’t train, I didn’t know what training was. I had a team-mate who said, ‘Oh,  I did this for a training ride,’ and I actually laughed at her, can you believe that? I would race my bike on the Saturday or Sunday, ride it the day after, maybe ride it once or twice during the week because I felt like it. And then probably ride it the day before the next race, and that was it. I then went and did the local hill climb season. After the Monsal Hill Climb, my in-laws said to me: ‘How can we help? What do you think would make a difference, if you want to go for it?’ I said I think I need to get a power meter and get a coach. That winter I started training."

Top of the world

"I’d been at university for six or seven years and then I left with only a short time to go. It was a really tough decision, but I have no regrets. I know that I would have regretted carrying on and not seeing where I could have gone with cycling. It was like, do I continue on this career with medicine where I know I’m going to get  well paid? I know that my husband, who would actually like to stop working and run a café instead - maybe I’d be able to support his dream. Or do I quite selfishly be like, no we’re going to go all-in on my dream and yours is going to have to wait? It was a really hard decision but it was also a no-brainer.

"I was unhappy in medicine. I was really and still am passionate about the subject  and making people’s lives better, but it was the job that I didn’t like so much: the other aspects of the job, and the way the NHS works, and things like that. I didn’t see a way things were going to improve."

"I crashed six days before my wedding. I’d had two punctures and I was drafting the car and – probably don’t tell the commissaires this - we’d been drafting the car for, like, half an hour and we were just about to get back on. We were going down this country lane and my other half was the mechanic in the front seat. He saw this massive rock in the middle of the road and thought, ‘Oh sh*t, I hope Lizzy doesn’t hit that.’ He looked back and just saw me go. Straight over. I landed on the back of my head and I don’t think I was too concussed, but I split my scalp by maybe three inches. I managed to stab a hair pin into the wound at about 10pm on my wedding day when I was a bit drunk. That was a little bit painful and then it got infected on my honeymoon. He was salt-washing my wound in my hair on our honeymoon, when it was about 35 degrees in Rome."

"This is my second year as a pro, my first year with Bigla and my first year racing in Europe, and so it’s only my fifth season racing at all. This year has been a pretty astronomical learning curve. Last year was a big learning curve but I was in America for most of the year and the racing is quite different over there. It’s a really good way to step in from domestic racing then step up to American, then into European. Over winter I was really nervous. I didn’t know where I would stand. I thought I would be able to cope with the level in the WorldTour but I didn’t know how well I’d cope with the endurance of doing so many more longer, more intense races. I learned so much over the first few months. I guess I learned how to race."

"This spring has been pretty awesome. I spent a lot of the spring working hard for my team-mates - I expected this to be my role. I got a chance being a leader - we lost our sprinter, she’s unfortunately out with an injury – so I took a chance in Yorkshire and then I proved to the team that I was strong enough. That brought more leadership opportunities, which enabled me to get those results. When you’re in a working role it’s not something that even enters your head."

Turning a bad day into a good one

"I actually felt total sh*t on that day [stage 8, Giro Rosa 2019]. We really wanted to set up a break the day before and it was a really frustrating day because the whole peloton wanted a break. When that happens there’s never the right constitution of riders because there’s always someone who isn’t in it and it always gets chased down. It was such a fast day. We were pretty frustrated. We woke up the next day and I was exhausted, Leah [Thomas] said she was so tired that her arms hurt. Cecile [Uttrup Ludwig] needed someone to help her come back from a pee stop and I said, ‘I’m really sorry, I can’t do it, I’m just going to get dropped.’ I went back for ice and I was in the last three in the peloton for about 5km because I couldn’t move up.

"But I had a lot of caffeine, a lot of sugar, and I knew I would probably come around after the first climb. I killed myself to get over it and it came back to about a group of 40, which was perfect. Leah was in the first five who went, then I bridged across with Soraya Paladin and a couple of others and we knew we had the perfect set-up. The break stopped working and we were like, we have to start attacking. We started at 15k to go, and I think I actually got away at 12k to go."

"Leah was killing herself behind for me. Without her I wouldn’t have won the stage. I have a lot to thank her for, and it’s her victory as much as mine. We were both equally happy for either of us to win that day. I think that’s why we worked so well."

"It was unreal to win solo. My old university friend had come to watch the Giro and she was at 2km to go. She had no updates, she said she saw a rider and was like, ‘Oh my god, it’s Bigla – I think it’s Lizzy!’ She ran from 2km to go, she legged it to the finish line and got there just in time. To have my friend from home there as well was so special. You dream of days like that."

If you like what you read, why not subscribe to Procycling magazine? As part of our autumn sale, a subscription currently starts at just £5 for the first five issues - that’s only £1 per issue. Procycling magazine, the best writing and photography from inside the world’s toughest sport.