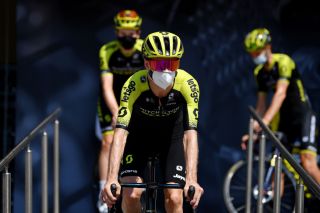 Mitchelton-Scott announced their eight-man line-up for the Tour de France on Thursday, with not a single Australian on the squad for the first time in the team's history.

They're also seemingly abandoning their general classification focus and returning to their roots as stage hunters. Adam Yates and Esteban Chaves have both competed for Grand Tour titles before but have been freed from the shackles of the overall fight and told to hunt stages at will.

They're joined by a strong support cast of domestiques, with options too for breakaways and reduced bunch finishes. Here we take a look at each of the eight riders on what could be one of the most active teams in the Tour.

The 28-year-old may be on his way to Team Ineos in 2021 but he still has the chance to leave his home for the last number of years on a high.

Mitchelton-Scott have been on the front foot in the last few weeks to press home the fact that Yates is heading to the Tour for stages rather than GC, and that’s probably the right approach. The British climber hasn’t come close to his 4th on GC in 2016 during recent Tour attempts and he’s yet to win a Grand Tour stage. If he achieves the latter it would be a significant milestone in his already impressive career.

He certainly has the quality and the route provides several opportunities to shine. If he can find the form he had at the start of the year, pick and choose his battles, and truly switch off from the pressure of GC racing, he’s a threat on almost any stage that ends on or near a climb.

A surprise inclusion to many but, with Luke Durbridge not selected, the team were in the need of strong workhorse for the flats, and for helping to keep the likes of Yates and Chaves out of trouble.

Bewley may not have raced the Tour during his career but he’s a Grand Tour veteran, with three Giros and five Vueltas under his belt. He’s finished every one those three-week races – bar his first Grand Tour – and brings a solid base for a team that will look to go on the offensive as much as possible.

A very busy three weeks lie ahead for the lockdown internet cooking sensation.

Like Yates, the gloss has worn off Chaves' Grand Tour pedigree in recent years, with injuries and illness taking their toll. The form, however, looks promising, with 11th in the recent Tour de Pologne and fourth in the Vuelta a Burgos. He didn’t quite have the quality to finish things off in Spain but, having not raced since February, riders from Colombia were always going to come back into Europe with a question mark over their condition.

The more racing in Chaves’ legs, the more he’ll improve and, with no GC aspirations in the Tour, the 30-year-old will have the chance to pick off stages that suit his style. No doubt Mitchelton-Scott will have already divided up hilly and mountain stages between their riders but if they’re all on song they could be the most aggressive team in the race.

Chaves, who has won Grand Tour stages in the last two years running, is a genuine threat to take his maiden Tour de France stage win this time around.

Took a very classy stage win in the Tour de Suisse a couple of years ago but is best known as being one of the hardest working and most liked domestiques in the peloton.

Like Bewley, he can provide cover on the flats but, unlike the New Zealander, he can stretch his services a little into the medium-sized mountains. He’ll get around the Tour, do his job, and probably infiltrate plenty of breaks between Nice and Paris. As well as supporting the climbers he can also help Impey and Mezgec in the reduced bunch sprints. He’s due another big win, looked strong in Burgos, and has the quality to snatch a stage if the opportunity comes his way.

The veteran domestique has become a regular in the Tour de France and he’s come out of lockdown in very good form, with 22nd in Strade Bianche and second overall in the Czech Tour.

Like Bewley, he’ll work tirelessly on the flats, protecting riders and closing gaps, before helping set up faster riders for the sprints. Bauer will do a lot of the early work in stages, the sort of things that TV cameras miss out on, but he’s an immensely valuable member of the squad.

He’s 36 but when Mitchelton’s sponsorship was on the ropes during the middle of the year, plenty of teams were sniffing around and looking to snap up the experienced climber. The team is now secure, and Nieve has a deal until the end of 2021, so the team’s management can breathe a sigh of relief, safe in the knowledge that they have the most valuable mountain domestique on the planet for another year at least.

In this year’s Tour, though, Nieve has the chance to break out and be more than a helper and with a mountainous profile, he’ll have plenty of chances to remind the WorldTour of his class. Just on pure talent alone, he’ll drift into the top-20 on GC but it’s a stage win that he’ll most cherish. He’s won stages in the Giro – three in fact – and one in the Vuelta, but completing the set would be the icing on the cake. His form is decent, and he just has a knack for picking the right day to attack.

If you’re going to bet on a Mitchelton rider winning a stage in this year’s Tour, and only had one pick, Nieve’s your man.

The Slovenian has been on Mitchelton-Scott’s longlist for the Tour more times than can be remembered, and finally, after years of near-misses, he has a Tour debut on the horizon.

He’s not the fastest sprinter, and up against the likes of Caleb Ewan and Sam Bennett he’s not going to win in a straight-up battle over a flat finish. Yet the 32-year-old shouldn’t be discounted in terms of what he brings to the team. There are plenty of stages within this year’s race when the pure sprinters will be put under immense pressure, and probably dropped, and from a reduced sprint Mezgec could pick up some quality results.

Tactically, having a sprinter in the game also changes the dynamic and takes the pressure off the need to constantly send riders up the road. Finally, he can turn on the power and help drive a break before the major mountains come into the frame.

A move to Israel Start-Up Nations beckons but before that Impey will captain Mitchelton-Scott one last time at the Tour. It’s been an incredible spell on the team for the veteran South African, who has won a Tour stage, worn yellow, and been a major force for the team over the years.

He’ll be hugely missed on the bus and on the road, while his recent form at the Critérium du Dauphiné more than suggested he could be competing for stages either from a break or within a reduced bunch sprint.