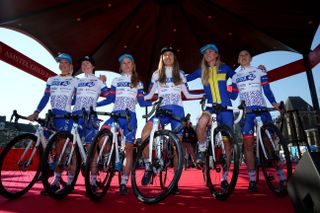 FDJ Nouvelle-Aquitaine Futuroscope officially started on the professional women's circuit in 2008 as the Vienne Futuroscope team and has quietly grown to become one of the top-ranked teams in the world. The team has developed riders such as Andrey Cordon-Ragot, Karol-Ann Canuel and has boasted the likes of decorated French rider Edwige Pitel. In more recent years, the team has relied on the combined strengths of one-day specialists like Roxane Fournier, Shara Gillow, Lauren Kitchen and Emilia Fahlin to perform in flatter races, the Classic and stage races.

FDJ Nouvelle-Aquitaine Futuroscope had two victories in 2019 with Coralie Demay in the UCI 2.1 La Perigord Ladies and with Jade Wiel in the road race at the French National Championships. The team doesn’t have a consistent winner like some of the bigger teams like Boels Dolmans, but their consistency in placing inside the top 10 has afforded them the points needed to be among the prestigious top-15 teams in the world ranking. That position has granted them automatic invitations to Women’s WorldTour races.

This year, Eugénie Duval was sixth at Omloop van het Hageland, and Fahlin was seventh at Trofeo Alfredo Binda and eighth at Driedaagse Brugge-De Panne (both WorldTour). Fahlin went on to a fifth-place overall at Festival Elsy Jacobs, Gillow was fourth at Durango Emakumeen Saria and ninth at GP de Plumelec-Morbihan Dames. The team’s youngest rider, Marie Le Net, secured a top-10 overall at the Tour de Bretagne Féminin. Kitchen stood on the podium at La Picto-Charentaise, and the team closed out the WorldTour season with Stine Borgli sixth at the WWT GP de Plouay and Fahlin ninth at Tour of Guangxi.

Cecilie Uttrup Ludwig: She is the newest addition to the FDJ Nouvelle-Aquitaine Futuroscope team for 2020. She is the missing piece to the team's puzzle when it comes to racing for victories. Uttrup Ludwig is a versatile champion who has the potential to win everything from cobbled Classics to Ardennes Classics to mountainous stage races, and FDJ has a team ready to support her.

Emilia Fahlin: One of FDJ Nouvelle-Aquitaine Futuroscope biggest signings for the 2019 season, the Swedish national champion brought a decorated palmares along with over a decade of experience to the France-based programme. She spent six years successfully racing with T-Mobile turned Columbia, HTC-Highroad, Specialized-Lululemon, before moving to teams Hitec, Wiggle and Ale. She was the team’s top finisher at the WorldTour races while also providing mentorship to the team’s development riders.

Shara Gillow: From Australia, Gillow has been racing with the French outfit for three seasons. Like Fahlin, she also brought them world-class racing experience having previously raced for teams Orica-AIS and Rabobank. Gillow is a versatile rider who earned top 10s in both one-day races like Emakumeen Saria and in a stage at the Giro Rosa.

Jade Wiel: Only 19 years old, Wiel won the elite women’s road race at the French National Championships. For a France-based team with national sponsors, this victory was arguable to most important result for the team in 2019. The team places a priority on racing events on home soil and doing so with the national champion’s is an added bonus. Wiel is also a development rider with potential for much more success and so represents the future of the team.

Stine Borgli: After spending several seasons racing for smaller teams and with the Norwegian national team, Borgli signed with FDJ Nouvelle-Aquitaine Futuroscope for the second half of 2019. She started the year with top 10s at Setmana Ciclista Valenciana and Festival Elsy Jacobs, and then an overall victory at the Vuelta a Burgos Feminas. Under the FDJ banner, she won the mountain classification at Tour de Belle Isle and placed third overall at the Women’s Tour of Scotland. She closed out the year with a sixth place at GP de Plouay and 10th overall at the Lotto Belgium Tour.

With riders like Fahlin, Gillow, Kitchen, Duval, Borgli and Wiel, over the years FDJ Nouvelle-Aquitaine Futuroscope had a combination of strengths in both one-day races and stage races, and even managed top-10 successes on the WorldTour. Those same riders also offer the team a mix of experience and youth that will ensure the team’s future success on the world-class stage.

The team has lacked a consistent winner, someone who is capable of contesting the finals of one-day races and stage races against the main players on the WorldTour. The team is frequently represented among the top 10 and if those riders’ efforts were instead focussed on supporting someone capable of winning, the team could be a major contender on the WorldTour.

FDJ Nouvelle-Aquitaine Futuroscope has the depth of some of the bigger teams like Mitchelton-Scott and CCC-Liv, but they have lacked a winner to support in the WorldTour races. As the team enters the 2020 season with a four-year Women’s WorldTeam licence and a newly signed leader to support in Cecilie Uttrup Ludwig, look for the FDJ Nouvelle-Aquitaine Futuroscope jersey on some of the biggest podiums in the Spring Classics and the mountainous stage races.