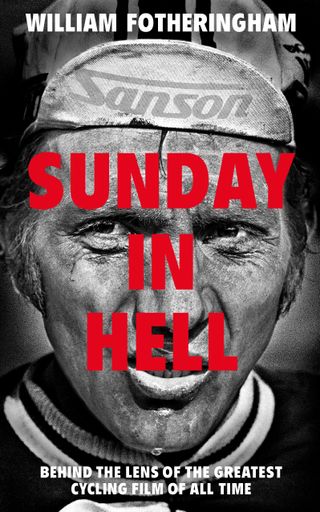 This extract from William Fotheringham's book Sunday in Hell, a 'biography' of Jørgen Leth's film of the 1976 Paris-Roubaix, depicts the key phase of race as the winning move forms.

Leth's film was first shown in 1977, to critical acclaim, and has been hailed as the greatest cycle racing film of all time.

The book Sunday in Hell is available here

"Now there is a new faller. It's Maertens."

There is a screech of brakes as the Ijsboerke car almost collides with Freddy, who lies on the floor in agony before being gently removed from the road in an attitude redolent of the crucified Christ being taken off the cross. "A French television motorbike fell on me; it was at the front, taking pictures," recalls Maertens. "It's one of those things - the driver came and found me afterwards to apologise. But it had gone over my feet and my leg. What can you say? That's Paris-Roubaix."

"Maertens sadly ends the race as a passenger in the doctor's car."

The crash [in the village of Templeuve with 36 kilometres to go] that eliminates the favourite is the key moment: it dictates the rest of the afternoon.  With Maertens out, the focus switches suddenly to Walter Godefroot, at 32, a near veteran; he had won Paris-Roubaix in 1969, and had found early in his career that the cobbles suited him.

"On the pavé, you get a kick through your legs that drives you along; when you get back on the tarmac your legs feel blocked. Then you get back onto the cobbles and get the kick again. That was why I liked Paris-Roubaix. I never wore gloves, never put extra padding on the bars, never wore a crash hat. I didn't need them. There were no tactics."

Godefroot is captured in a sequence shot by Paul Constantini, one of the mysterious cameraman's finest pieces of work. Jørgen Leth explains: "he was shooting with delay, slightly slow-motion. It gave him… a very fluid quality in the images. He was an artist."

Slow motion remains a predilection of Constantini's: as he discusses his work, he mentions a shot in which he has slowed a tennis player's action to 400 frames per second. For the Godefroot sequence, he gets close in. The Bulldog of Flanders's hair flows in the wind … most distinctive of all, his watch bounces up and down as his body and bike are battered by the cobbles.

More than 40 years on, Godefroot still remembers the watch; the makers' name, Rodania, is visible on the strap. Before the invention of the cycle computer, he says, the watch was a vital source of accurate information amidst the blind man's buff on two wheels. "You had no way of calculating the distance, so you worked it out through time. You would learn to feel if you were going quick or slow and work from there. You knew the route, you worked from your watch using the speed."

"Now it is his turn to force the pace so it hurts."

It is Godefroot who sparks the winning break in the cobbles between the villages of Nomain and Bachy – almost five kilometres of pavé which have now been tarmacced over - with his effort drawing De Vlaeminck and Hennie Kuiper in his wake.  Ron Goodman in the Wescam helicopter captures the moment: De Vlaeminck looks back, sees no sign of Merckx or Maertens and makes the instantaneous decision to press on.

The quartet is joined by Moser, whose immense power - and courage in the way he drives his bike across the pavé - is captured as he speeds between Raymond Poulidor and Jean-Pierre Danguillaume. The French pair flounder as they attempt briefly to hold Moser's wheel. It's something most competitive cyclists can relate to: force so superior as the rival goes past that you can only look on and wonder. What we don't know is that Danguillaume is struggling with a broken back wheel [and] had faced the classic dilemma: chase with defective equipment or stop and lose everything.

Godefroot is philosophical now about the number of times he punctured in Paris-Roubaix. "…always at bad moments. The year I won I punctured, no one saw. Other times, you wait." This time, he is out of luck. When his front tyre goes down on a right-hand bend, the Ijsboerke car is stuck behind the chasing group containing Merckx and company. As far as winning is concerned, his race is over. "A real disaster for him and so another man's chance has gone."

Back in the Brooklyn team car, there is confusion, briefly, as direttore sportivo Franco Cribiori and the commissaire try to work out who is in front, by a process of elimination ("Moser is not there," they agree, referring to the chase group in front of them; they can't see Moser, hence he must be in the break). It's a situation that has occurred in countless team cars in countless races at all levels; that moment when the race radio simply won't say precisely who is where.

However, the final selection has formed: "The Italian Moser, the rival Belgians De Vlaeminck and Demeyer, the Dutchman Kuiper in the world champion's rainbow jersey, these are the four who have gained for themselves a vital position."

To De Vlaeminck's surprise and enduring anger, the final victory that day went to Marc Demeyer who took full advantage of his leader Maertens's absence after his crash.

The book Sunday in Hell is available here