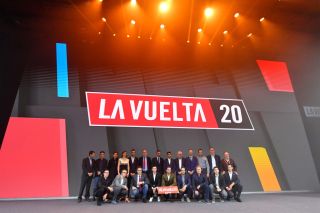 Three major summit finishes, four mountainous stages, one very hilly stage, and a finish on the Tourmalet in late October. Put it all together and the revised 2020 Vuelta a España route, bereft of its three stages in the Netherlands, now looks set to become Grand Tour racing's hardest-ever first week since World War II.

It's impossible to consider cycling's projected 2020 season without adding in the huge caveat of an ongoing coronavirus pandemic, the risks of a second outbreak and the possible impact of public-health measures in France and Spain. All three of these factors could yet play havoc with the revised race calendar.

Assuming the season plays out as planned, the Vuelta has been reduced to 18 stages and will kick off on Tuesday, October 20 in Spain's frontier town of Irun in the Basque Country. The first six days suddenly look even harder than recent previous editions of the race. None of which, with multiple steep little summit finishes and the odd ascent of Sierra Nevada or similarly tough challenges, have been easy.

Further afield, prime candidates for the unofficial 'hardest first week' of a Grand Tour include the Giro d'Italia in 1989, when it had an ascent of Mount Etna on stage 2, and 2017, when it tackled the Sicilian monster climb on stage 4.

But in neither case did the Giro's first six days contain as many mountain challenges as this year's first six stages of the Vuelta. In 2017, the Giro had started with a relatively gentle three-day stint in Sardinia, and in 1989, while the Giro later tackled the Gran Sasso and had a team time trial that week, the other days were not nearly so difficult.

As for the Tour de France, even in this year's exceptionally tough first week, after six days of racing the Tour will 'only' have had two summit finishes. One will be at the comparatively easy Orcières Merlette ski station in the Alps, while the second will be a long, grinding ascent through the Massif Central to Mont Aigoual. Even if you add in the Pyrenees, which come at the start of the second week, the Tour route is not excessively difficult.

In comparison, by day six of racing and at the end of its first 'week', the 2020 Vuelta will have had three major summit finishes. These include its toughest stage by far: the short but fearsome run through the French Pyrenees, over the first-category Portalet, the hors-catégorie Aubisque and Col du Tourmalet summit finish, as well as the unclassified Soulor in between.

That's just the last day of the Vuelta's short, ultra-intense first week. Bereft of its first three stages in the Netherlands, the 2020 Vuelta a España will now start on Tuesday with a very hilly stage, finishing on the Basque Country's Mount Arrate.

Densely wooded and steep-sided, not to mention being a valued nature sanctuary to the rare Azpi Gorri or Basque shaggy goat, Arrate is traditionally the finale for the most decisive stage of the Itzulia Basque Country in April. This year at the Vuelta, it will be immediately preceded by another second-category climb and two third-category ascents.

Added to the prestige of winning on one of the Basque Country's most emblematic climbs in cycling will, of course, be the attraction of a guaranteed spell in the Vuelta's race lead. Riders will be in top form and fresh for racing, given this is the opening stage.

Last used at the Vuelta a España eight years ago in 2012, Arrate was the scene of a memorable victory for Alejandro Valverde, and he won there again in the Vuelta al País Vasco in 2017. Should he take part, as planned, Valverde – who was the runner-up of the 2019 Vuelta at 39 – could well be a major favourite for an early spell in the lead.

Things do not get any easier on stage 2 of the Vuelta, with a late ascent of the first-category Aralar – a viciously steep climb in north-west Navarre where an out-and-out climber like Fabio Aru won in 2014, prior to a fast, technical descent. Featuring 14 per cent ramps and with cement sections on its upper slopes, Aralar will be the second opportunity in 24 hours for an important GC weed-out.

As if that wasn't enough, stage 3 concludes with the first-category ascent of the Laguna Negra de Vinuesa. Unprecedented for the Vuelta, and nearly eight kilometres long, assuming they use the harder of two approach roads up the climb, Vinuesa's toughest segment is halfway up, with a kilometre averaging out at 11 per cent. Either way, riders will face what is the Vuelta's second summit finish, and third incursion into the hills or mountains, in three days.

Assuming there are no echelons, the sprinters will finally get a look-in on the stage 4 flat, probably very windswept, run across eastern Spain to Ejea de los Caballeros. Then, while stage 5 doesn't look nearly so hard as the opening trio of stages on paper, its densely hilly finale could spring a few surprises.

The most difficult of the climbs on stage 5 is the last – Petralba – which is rated as second-category and nine kilometres long, and just 15 kilometres from the finish. Averaging nine per cent, it is toughest at the bottom, but with a long section through a tunnel near the top. Petralba could see a dark-horse GC contender on the attack prior to Sunday's set-piece Pyrenean showdown on the Tourmalet.

Just as crucial as what the Vuelta has gained in its late-season, shortened version, is what it loses – most notably the Utrecht 23km team time trial.

A lot longer than the 13km TTT that opened the Vuelta a España in 2019, the closest comparable recent Grand Tour stage was the Tour de France's 27km race against the clock in Brussels last July. Time losses in Brussels were as as high as two minutes between winners Jumbo-Visma and the last-placed team, and they could have been similarly important at the Vuelta this year.

Then there's the absence of two flat early stages to consider, which, apart from decreasing any scant interest the 2020 Vuelta might have offered sprinters to even lower levels, also reduces the risks of echelons and early crashes before gaps on the GC begin to open up even further on the climbs.

The other change planned for the Vuelta, in the third week – the cancellation of the Portuguese stage into Porto, and the next day back to Spain at Ciudad Rodrigo – is not expected to have any major impact. Both stages were originally through flat or rolling terrain, and the replacement route, while yet to be released, is said to be equally straightforward. The Vuelta organisers have also said that no further changes are expected to the race route overall.

It's clear, then, that scrubbing the Netherlands from the 2020 Vuelta route will largely benefit the climbers over the all-rounders and teams with strong time trial line-ups like Astana, who won the Vuelta's opening TTT last year.

It already seemed certain that a climber will be wearing the red leader's jersey on stage 6 at the summit of the Tourmalet, on this reshaped 2020 Vuelta route, that prospect looks even more likely than ever.