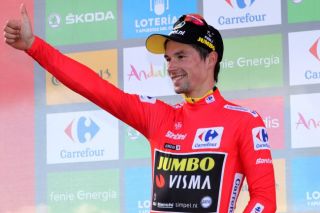 Two days ago, former racer Joaquim Rodríguez told Cyclingnews that Vuelta a España leader Primoz Roglič (Jumbo-Visma) had a 90 per cent chance of winning the Spanish Grand Tour outright. But after the Slovenian's performance on Los Machucos on Friday's stage 13, that probability has risen by at least another five percentage points, if not more.

It's not only that after a summit finish somewhat comparable with the Angliru, Roglič now has a hefty cushion of 2:25 over his closest rival Alejandro Valverde (Movistar).

Rather the biggest question mark over Roglič prior to Los Machucos was how he would perform in the mountains when the Vuelta moved into its second half. All it has taken is one seven-kilometre climb for the cycling world to see quite how little Roglič has to fear on the four mountain stages remaining between here and Madrid.

The way Roglič rode Los Machucos wasn’t a Grand Tour winning performance, but it certainly contained all the ingredients he needs to do exactly that.

Together with Tadej Pogačar (UAE Team Emirates), Roglič could easily suffocate his rivals' timid attacks – in Miguel Ángel López's case, to the point where the Colombian, having put his Astana squad to work in the previous 30 kilometres could never even attempt to go clear –  and then distance them, without really raising his own pace.

Not by a massive amount, it's true, but the relative ease with which Roglič created his 27-second margin over Valverde and Quintana and a minute on Lopez was so intimidating that both Spaniard and Colombian had barely reached the summit before they both pronounced the Slovenian the strongest man of the Vuelta.

On top of that, Miguel Ángel López (Astana Pro Team), possibly the most unpredictable and fiery of Roglič's climbing rivals, looks to have lost his top mountain form just when he needed it most. That said, past history shows that it wouldn't be out of López racing character at all for the Colombian to bounce back as abruptly as he appears to have fallen out of contention for now.

Can Quintana and Valverde bounce back?

Nairo Quintana (Movistar), for all he seems to have decided he has nothing to lose by attacking for the hell of it in a manner vaguely reminiscent of Alberto Contador in 2017, was not firing on all cylinders on Los Machucos. It remains to be seen if Quintana's promise of long-distance attacks on 'real' mountain stages like the ones in Asturias can do some more damage than his timid move on the ultra-steep ascents like Los Machucos.

Certainly it would be unwise to rule the Colombian out just yet. Valverde, in the meantime, seems content to limit the damage whilst battling for his umpteenth Vuelta podium.

So for all his youth, could Pogačar, now third overall at three minutes, be the rider whom Roglič should fear the most from here to Madrid?

Pogačar was certainly able to match his compatriot on los Machucos and he was the winner in the Vuelta's toughest mountain stage in Andorra, too. So it will be intriguing to see whether the 20-year-old opts to play a conservative game with the objective of taking a podium or whether he goes for broke and aims all out for the win.

Yet for now, Roglič remains the man to beat and the rider with by far the best options on winning the 2019 Vuelta.  It's not only his individual talent and his hefty overall advantage. Jumbo-Visma are one of the strongest teams of the Vuelta a España, if not the strongest, and from the flat to the climbs, the Dutch squad seemingly have all the bases covered.

That's not to say that the Vuelta's eight remaining stages offer no opportunities for Roglič's rivals to turn the tables. The Spanish Grand Tour is rightly famous for last minute reversals of fortune, too, and it could be that Roglič pays a price for the daily toll of leading the race.

Stranger things have happened in the Vuelta in September and the sierras of Madrid are notoriously famous for GC upheavals when the finish is almost in sight – as Roglič's future teammate, Tom Dumoulin, knows only too well.