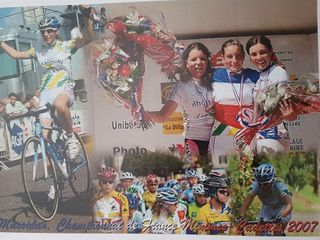 Pauline Ferrand-Prévot (Canyon-SRAM) has spent a significant portion of her career wearing a rainbow jersey in road racing, mountain biking and cyclo-cross. She made history in 2015, at the age of 23, when she became the first cyclist to simultaneously hold world titles in all three disciplines.

It's been a turbulent few years for Ferrand-Prévot, who has twice undergone surgery to correct double iliac artery endofibrosis, from which she has fully recovered.

She added two more rainbow jerseys to her long list of achievements last year, winning both the cross-country and marathon world titles at the UCI Mountain Bike World Championships in Mont-Saint-Anne, Canada.

Ferrand-Prévot has now turned her attention to the Tokyo Olympic Games, rescheduled for July 23 to August 8, 2021.

I would say my first year at the French Minimes Championships in 2005 was my first significant race. It was on the road, and I won with the Cadettes, so I became the youngest champion of France at 13 years old. It was near Gap. I had attacked on a hill, and the other girls had joined me with five kilometres to go to the finish, and I beat them in the sprint. I think they hated me! But it really was the start of my career, and my first national title.

I remember I was the favourite in both races, but in Mont-Sainte-Anne it was hard because I was putting my title at stake as the defending champion, and I absolutely wanted to keep my title.

On the road, the year before, I was second in the time trial, but I think I could have won because I lost by just five seconds. I really wanted to do well in the road race, and there were five of us who came to the finish together, and I won the sprint. It was really cool!

My title in Andorra at the UCI Mountain Bike World Championships in 2015 was special. It was my third simultaneous world title. It was pretty symbolic, too, because winning the triple world titles – road (2014), cyclo-cross (2015) and cross-country mountain bike (2015) – in a year is my little world record.

I remember it very well because Yvan [Clolus] trained me that year, and I already had a sore leg, so it was a bit odd. A week before, I had done a World Cup on the road and finished second, but I was not feeling very well and a little tired. And in the warm-up for the team relay, with Yvan, I fell, and I cut open my chin, so there was a little sign of fatigue. I wanted to be courageous in the race because my whole family was there, but the last lap was really tough, despite my lead.

The Rio Games in 2016 – both on the road and mountain bike – were horrible! I was injured, and it was going to be hard to win a medal. You can feel it very well when you're not 100 per cent, but you can't refuse to go to the Olympics.

There was a climb in the road race, and I don't know how many kilometres it was, but if you weren't in shape, you had no hope of being good in a race with that kind of profile, and I finished 26th.

In the mountain bike event, it was undoubtedly the race with the highest level [of competition] in four years. Everyone had prepared thoroughly, and so if you're not 100 per cent, there's no forgiveness. And it offered me no forgiveness: I was a 'DNF'.

It was at the World Championships in Mont-Sainte-Anne in 2019 where I found that I was again flying on the bike.  It's not pretentious, but I feel that when I win races, I often do it with ease, and don't feel like I'm going too hard.

My biggest race wins are not related to memories of pain; I always felt it was a great day!

At these World Championships, we had taken second in the team relay just before, and I had a super time. And then – in the cross-country race – it summed up my past seasons: a fall at the start, the need to be patient, to stay confident, to rise little-by-little until victory!